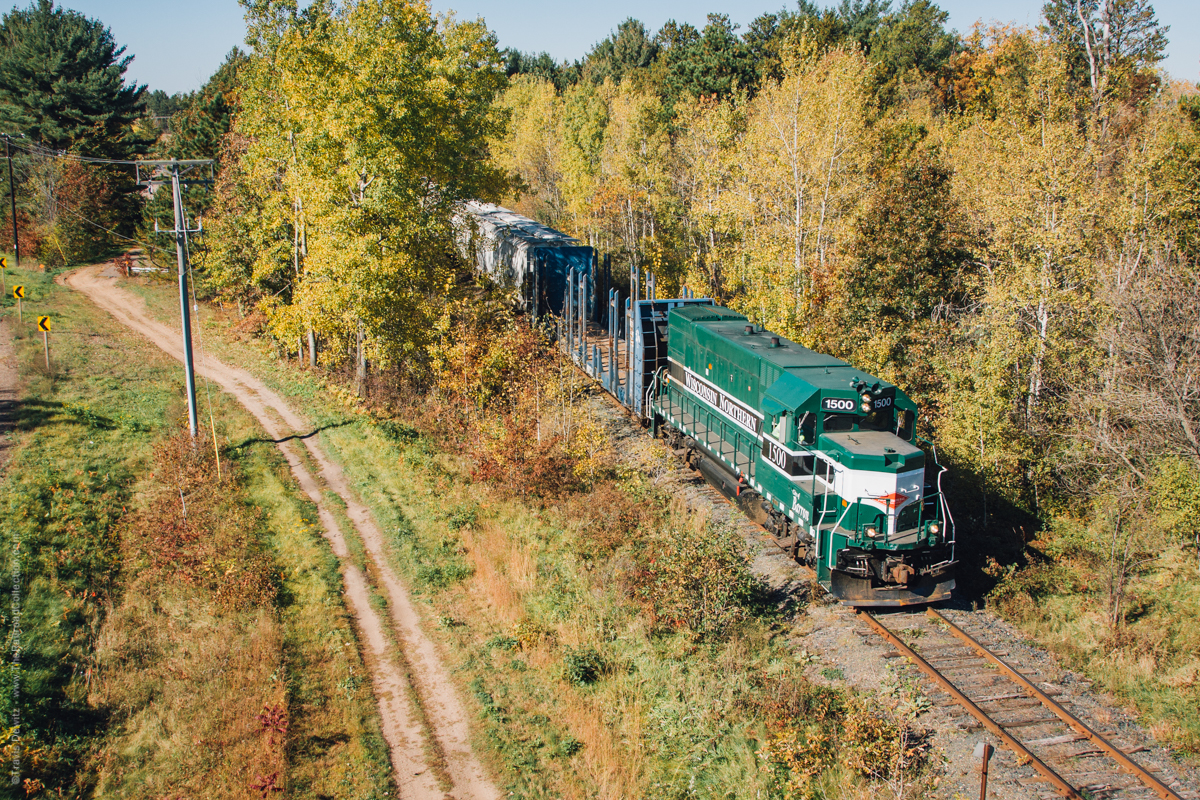 Wisconsin Northern GP-15 number 1500 hauls cars from Bell Pole and the Jennie-O Turkey Store east from Barron to Cameron. Here at Cameron, the train will take the Chippewa Falls Sub south to their yard in Norma.

The Wisconsin Northern in Twenty Ten 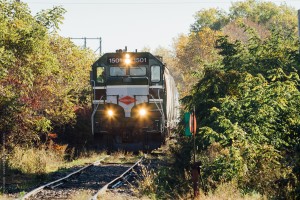 Wisconsin Northern 1501 lumbers down a section of the Barron Sub that is slightly overgrown.

Located in beautiful northern Wisconsin is one of the country’s newest shortline railroads—the Wisconsin Northern. Operating on 50 miles of track in Barron and Chippewa Counties, the WN ran its first train on November 23, 2004. Running on leased trackage from the Canadian National Railroad and the Union Pacific Railroad, the WN primarily has inbound loads of turkey feed, fertilizer, lumber, plastic pellets, and poles. The Canadian National track exists from Cameron to Barron and Cameron to Rice Lake. The Cameron to Barron section is part of the original Minneapolis, St. Paul & Sault St. Marie Railroad (Soo Line) built linking Minneapolis, MN with Sault St. Marie, MI. The Soo Line laid its first track at Cameron in 1884, bringing supplies in on the Omaha Railroad. This east-west corridor was run by the Soo Line, the Lake States, the Wisconsin Central, and the Canadian National. The track from Cameron to Rice Lake and Cameron to Norma on the north side of Chippewa Falls is part of the Chicago, St. Paul, Minneapolis, & Omaha Railroad (commonly called the Omaha) and constructed in 1883 connecting Chicago with the Twin Ports of Duluth and Superior. This trackage was operated by the Omaha, the Chicago & Northwestern, and the Union Pacific. The original village of Cameron was located one mile south of the present site but was moved to its present location when the Soo Line arrived. 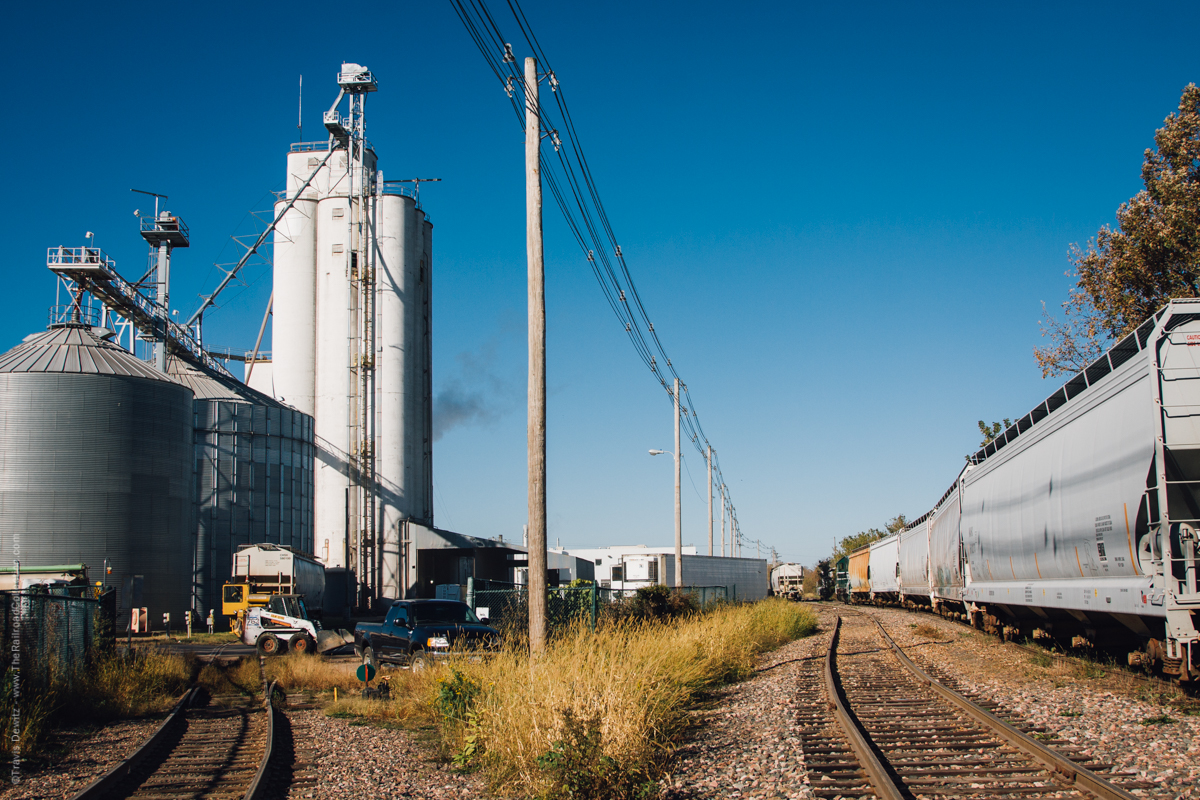 The Wisconsin Northen is spotting a string of hoppers of soy meal and/or corn used by the Jennie-O Turkey Store in Barron, Wisconsin. The soy meal and corn are used for turkey feed. Jennie-O is a wholly owned subsidiary of Hormel Foods Corporation. This plant is the only Jennie-O plant not located in Minnesota. It has been a part of the Barron community since 1922 and is now one of the most state of the art turkey processing facilities in the United States. It is also the largest employers in Barron County. 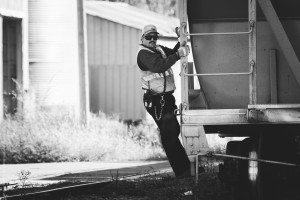 The Wisconsin Northern conductor rides a set of cars being spotted in Bloomer, Wisconsin.

In August, 2001, the Wisconsin Central Railroad announced its intention to abandon its line from Ladysmith through Cameron to Barron and Rice Lake. At the same time, the Union Pacific was providing one day per week service to Bloomer and Chetek. Concerned shippers met with representatives from Barron and Chippewa County Governments and the Wisconsin Department of Transportation. This led to the formation of the WWRTA (West Wisconsin Rail Transit Authority) in July, 2003. The purpose was to ensure rail service on Canadian National lines from Cameron to Almena and Cameron to Rice Lake, and the Union Pacific rail line from Eau Claire to Cameron.

The Transit Authority sought a shortline operator to serve the two counties and in 2003 selected Progressive Rail of Lakeville, MN to operate the line. PGR chose to name the Wisconsin Division the Wisconsin Northern. In 2004 the Wisconsin Northern entered into lease agreements with the CN and the UP to provide service on above named lines. All traffic is interchanged with the Union Pacific at Norma. 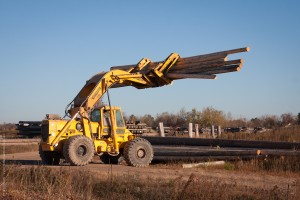 A heavy equipment operator grabs a stack of wood poles to be moved to the drying facility. This is Bell Lumber and Pole Company’s Barron pole yard facility. The company was established in 1909 in northern Wisconsin. The company has grown throughout North America since then. This particular pole yard was served by the Wisconsin Northern until Canadian National took back over operations on the Barron Sub.

At the time of writing this article, the Wisconsin DOT is working with the WN and the WWRTA to purchase the trackage from Cameron to Almena and Cameron to Rice Lake from the Canadian National Railroad. On May 29, 2009, the WDOT, the WWRTA, and the WN entered into a series of agreements under which WN will lease the line and provide rail service once the lines are acquired. WDOT is also in negotiations with the UP to acquire the Norma to Cameron line. After the purchase of each section, rehabilitation of track will occur with funding supplied by an 80/20 split between the DOT and the two county governments. 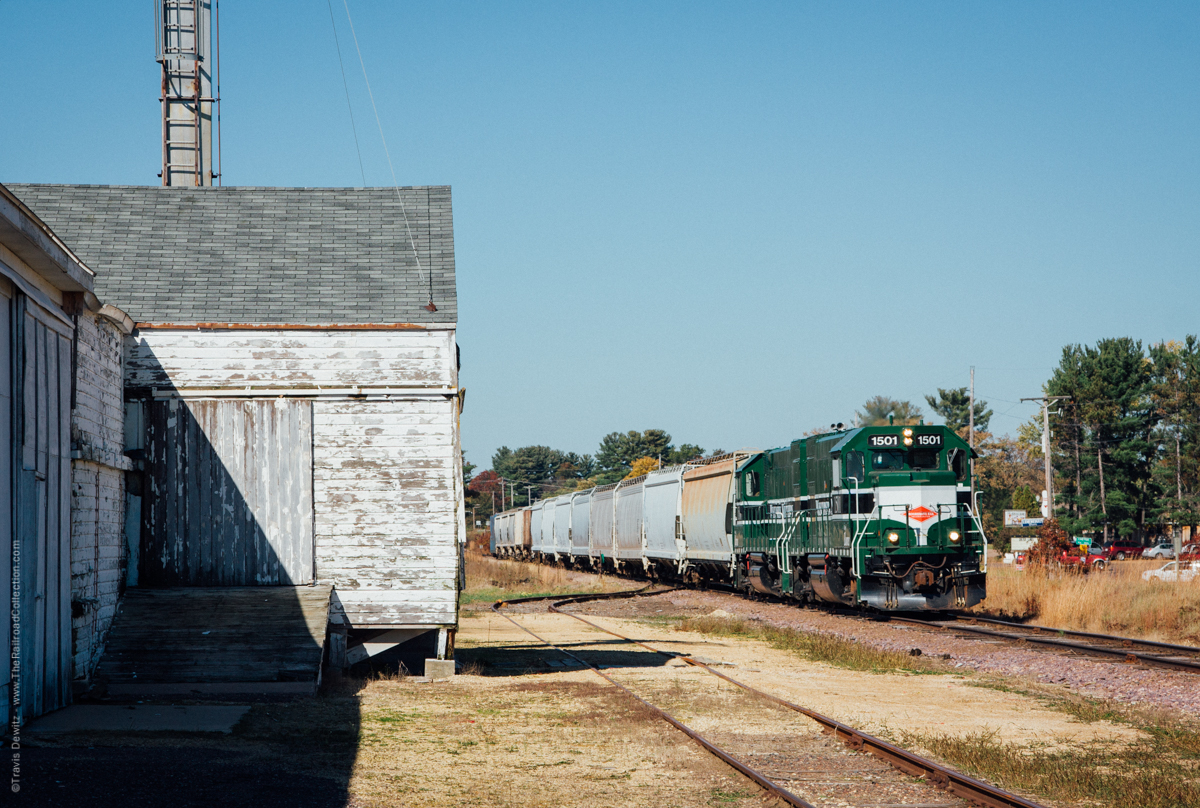 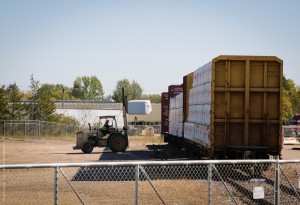 Crews on the WN operate Monday through Friday going on duty at 8 AM. The Union Pacific leaves interchange cars at Norma on Sunday, Tuesday, and Thursday evenings. On Monday and Wednesday mornings the crew puts the cars in the order needed and switches Pliant Plastics before heading north. Return trips south are on Tuesdays and Thursdays. Friday activity usually is service to Bloomer or Chetek with return to Norma. Operating with engines on both ends of the train in pull-pull fashion allows the crew to spot cars at industries with facing or trailing point sidings. The two-man crew runs with the engineer running the train and the conductor following the train in a truck, parking where needed to throw switches, spot cars, and transport the engineer to the other engine as needed.

Speed limits are 25 MPH from Norma to south of Bloomer with the remainder of the line rated for 10 MPH. It takes a day to make up the train, spot industries, and make the trip to the north end.

Largest customers on the line are Jenny O-Turkey Store in Barron with about 600 carloads of turkey feed annually, PMI in Bloomer with 350 cars of coiled steel yearly, Pliant Plastics in Chippewa Falls with 300 car loads of plastic pellets, ABC Truss in Chetek with 200 loads of lumber, and Bloomer Plastics with 175 loads. 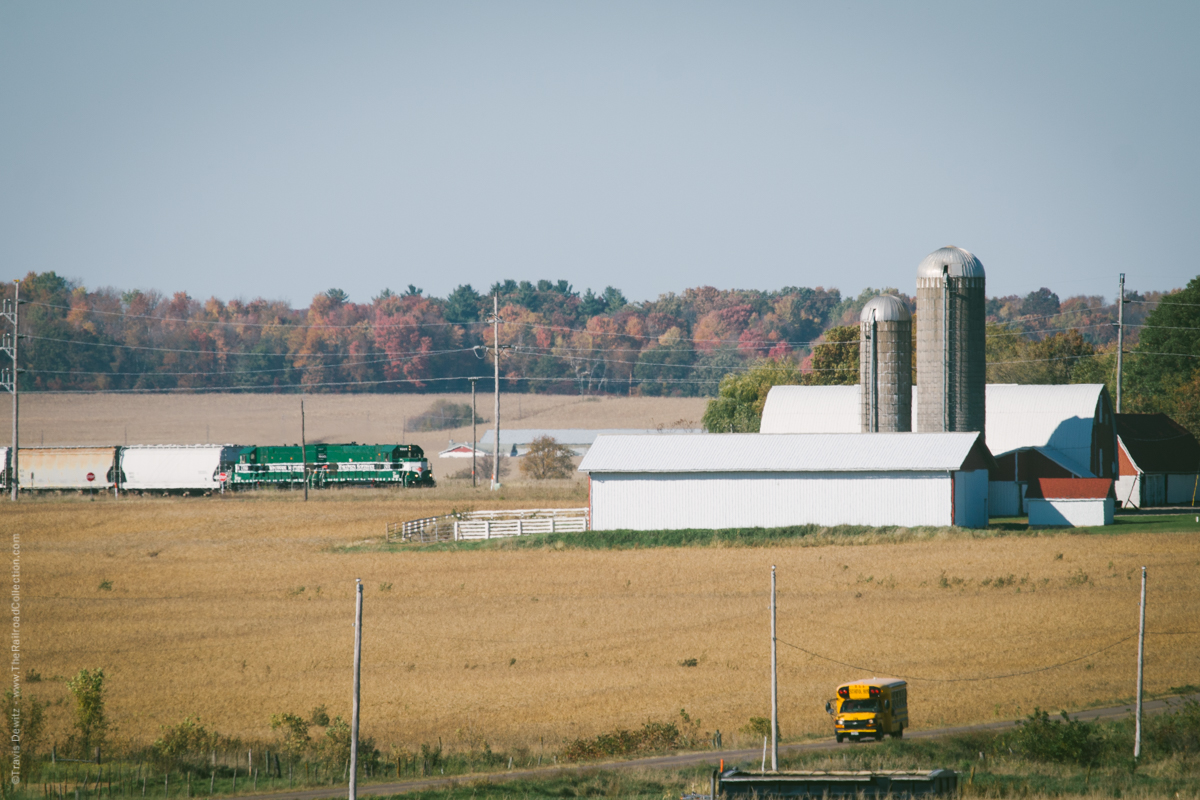 A typical Wisconsin countryside autumn scene. School bus drives down a long country road as a Wisconsin Northern train travels pasts the farms along its route to Chippewa Falls.

A pair of leased GP-15 engines would serve for power on the WN but the units had not arrived in time for the beginning of operations so a pair of GP38-2s were leased from the Iowa Northern and a former Conrail GP38 brought over from Lakeville. These worked until the GP-15s made their first run on April 29, 2005. The units were painted in a Southern Railroad-inspired theme, numbered 1500 and 1501 and named the “City Of Barron” and “City Of Bloomer” after the two biggest towns on the line and having the most business. These units were former Frisco units. 1500 was SLSF 102, then BN 1377, and BNSF 1477. 1501 was SLSF 118, BN 1393, and BNSF 1493. The Conrail unit was exchanged for a SW1500 painted in Progressive Rail colors which mimic the Minneapolis, Northfield, and Southern Railroad. That unit was originally a Southern unit and Norfolk Southern 2347.

A caboose was leased from the 2719 Locomotive and Tower Preservation Fund group but it was found it was not needed, especially when the crew went to the pull-pull operation. 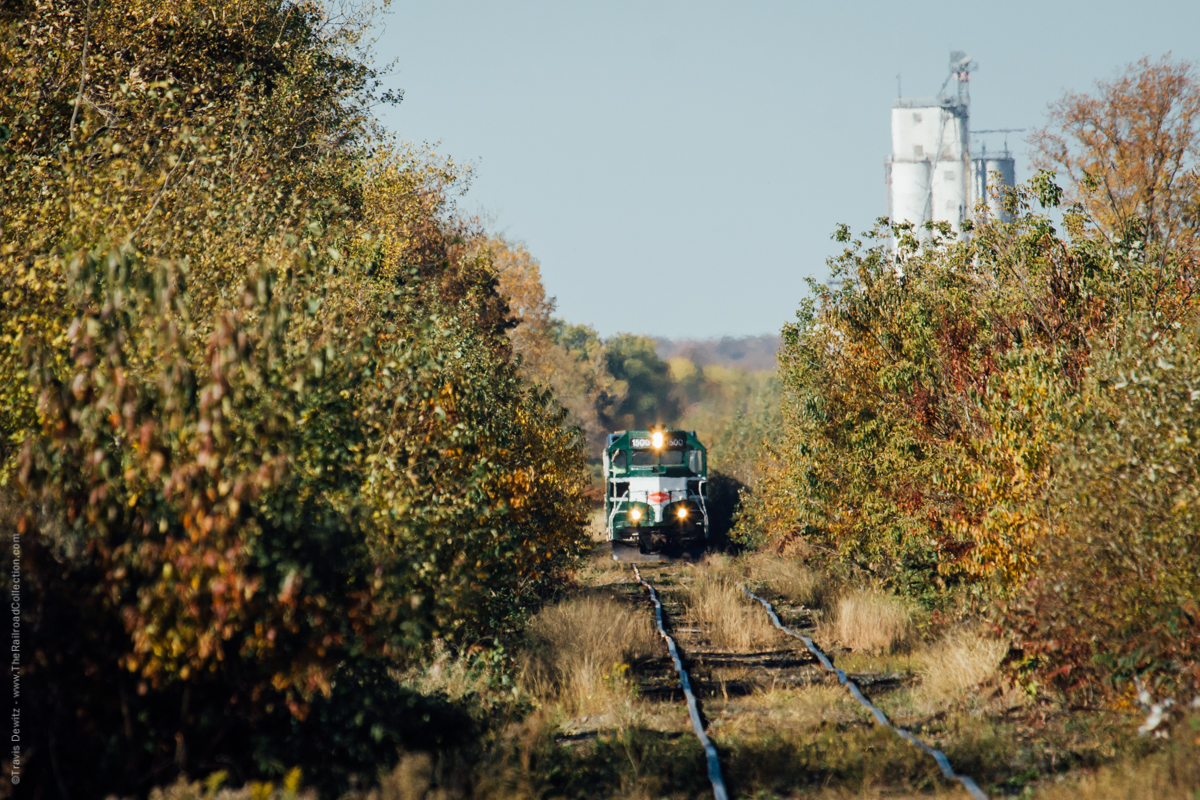 Wisconsin Northern 1500 lumbers down the rough tracks of the Barron Sub after switching the Jennie-O Turkey Store seen towering in the background in Barron, Wisconsin.

Railfanning the WN is quite easy as highways parallel most of the right-of-way. Highway 124 follows the track north from Norma for 5 miles before angling away. At Bloomer, Highway SS parallels the track all the way to Rice Lake. At Cameron, trackage follows County Highway W to Barron. Scanner frequency is 160.35. There are 2 overpasses to photograph from: Highway 124 north of Norma and Highway 8 south of Cameron. There are a few short bridges, most notably in Chetek and Barron. 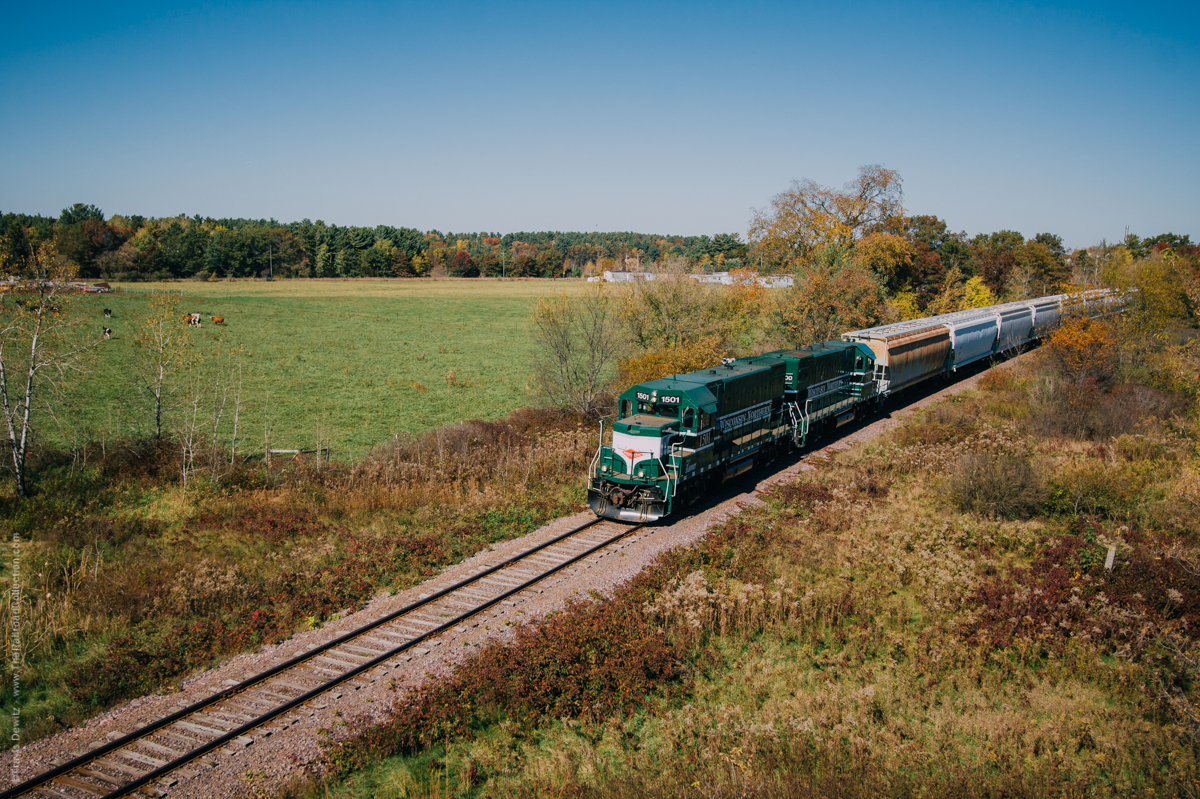 The almost daily Wisconsin Northern train heads south out of Cameron, Wisconsin to Norma. These tracks use to be a part of the Chicago and North Western’s route between Eau Claire and Superior.

The future looks bright for continued rail service in Barron and Chippewa Counties. Track speed will be increased when track renovation is completed, allowing faster service to customers. Revenue will be increased when the sand project(s) are completed. At the time of this writing the WN supplements its income by storing about 500 rail cars on the property.

With the aggressive marketing of parent Progressive Rail and the backing of Barron and Chippewa Counties, the future indeed looks “green” for the Wisconsin Northern! 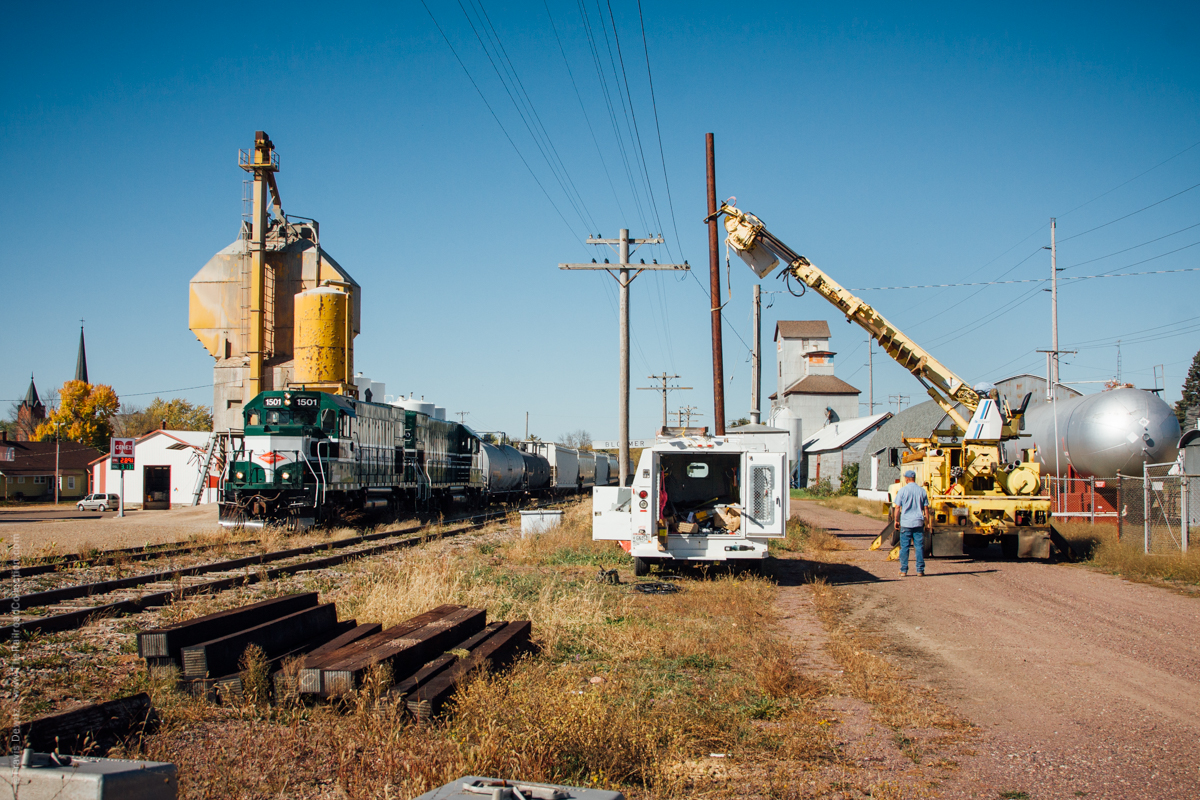 Wisconsin Northern departs Bloomer, Wisconsin towards Norma as a utility company worker stops to watch before continuing to set a utility pole.

This is what the trackage of the WN looked like in 2010. Map used with permission – www.spv.co.uk. 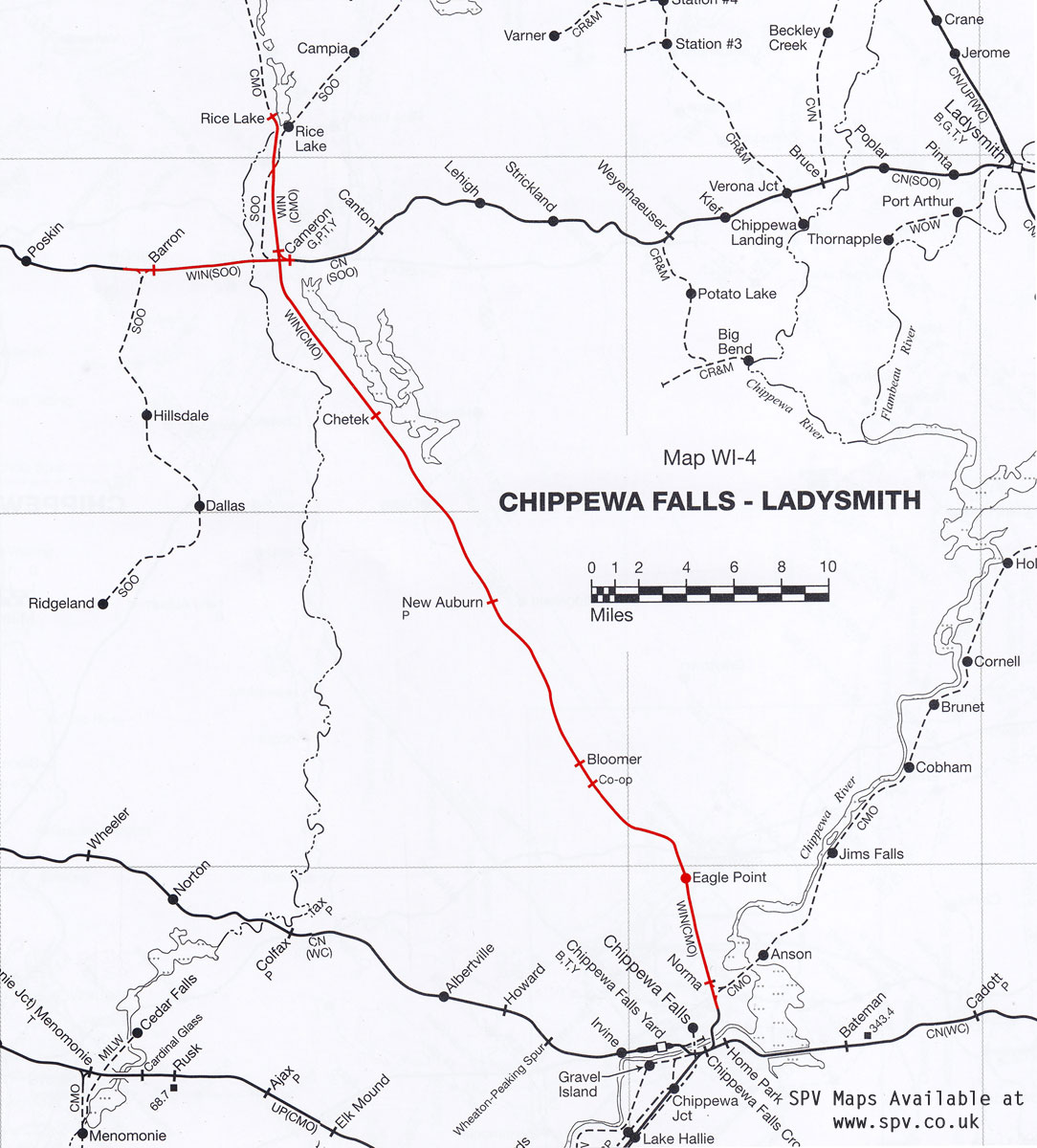 Photography by Travis Dewitz – See the Wisconsin Northern’s sand business today in Skyscraper of the West.

Read More Here About Arlyn – arlyncolby.blogspot.com
For information on his books, call (715) 637-3928, or email barronrrbooks@yahoo.com 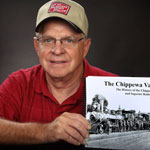 About the Author
Arlyn Colby, a retired math teacher from Barron, WI, is known to many railroad fans in the Indianhead Country as he has been involved in numerous railroad related events for years. He has taken on the important task of preserving railroad and community history of our region. Not an easy task. Several years of his life have been invested in accumulating the pictures, stories, and other details that he organized into the books, The Mondovi Line, The Blueberry Line, and The Chippewa Valley Line. His fourth book Omaha Branchlines In Northern Wisconsin is currently in progress.