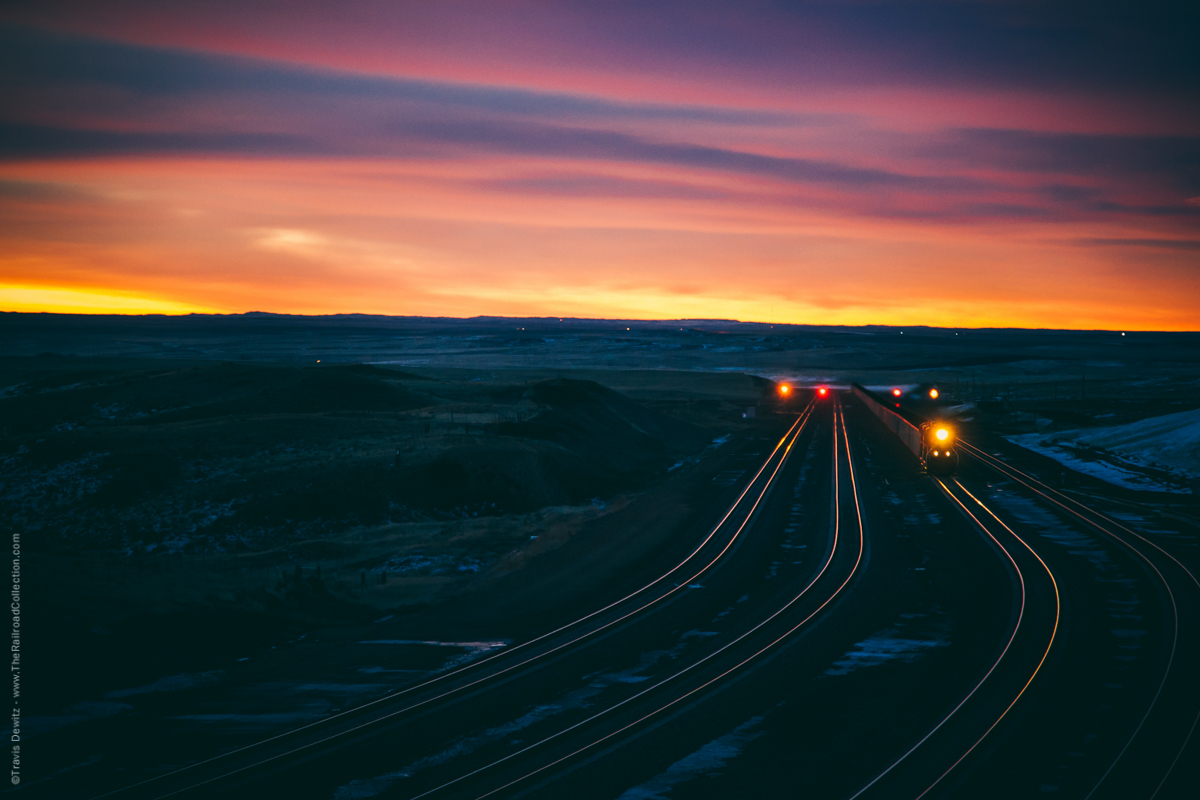 One of the busiest railroad locations in the United States is the Powder River Basin. There can be over one hundred trains a day hauling forty percent of the nations coal demands. These are the the four tracks that cross over Logan Hill just north of Bill, Wyoming on BNSF’s Orin Subdivision. This is the view looking south on one of the toughest grades in the basin. This line started as a single track owned by the Burlington Northern which was constructed between 1972 to 1979.

There are a multitude of reasons why you may need or want to research railroads and their current and/or historical operations. Common reasons that come to mind include planning a road trip, researching local history, interest in operations, or you just want to see the changes to your favorite railroad. Before the internet your options were limited. Your best option was probably a bookstore or a library, hoping they had a book or two that covered the subject you wanted. I know many would befriend railroad employees to learn or find out about current operations. Trading pictures was a thing too. The database of knowledge about railroads has exploded since 1991 when the “WWW” came to be. Once the internet was opened up and become popular for public use, information has been only a few keystrokes away. Below I will cover the resources I use often and I hope others comment below on their favorites that I missed.

One of my favorite times to get elbow deep in the net is when I stumble by a location that appears to have more of a story. Maybe I see a set of abandoned bridge abutments or some abandoned tracks in the weeds. Maybe the town I am in just looks interesting. I may jot down some notes or try to remember the place for when I get back home. I will start digging through Google looking for a little bit of information which more often than not leads me to even more. Before I know it I have 5 browsers open, 3 maps, and a stack of books out. Learning the history of a place I have been too has always been very interesting to me.

The loop track at Smart Sand, Inc. just outside Oakdale, Wisconsin. This plant is served by the Canadian Pacific. The plant was built right off the CP Tomah Subdivision for rail access.

I am a rail photographer, so much of my research is related to my next journeys along the tracks. That isn’t the only time though, sometimes I just want to be whisked away into the past to see what I wasn’t able to experience, or sometimes painfully, what I just missed.  There are many places to look at and search train photos. I am the type that I like to have my couple of favorite go to websites that I use almost exclusively. One of the greatest tools is controlled by creator and not the website itself which is the description. A great description can really tell the rest of the story not seen in the photo. The two I use are railpictures.net and flickr.com that I will go over below.

One of the biggest benefits of this website are the quality of images. The images are screened which helps keep the quality high. Their site also includes good search tool to help you narrow down what you are looking for. Another big benefit is that the site has only railroad related photos, so you don’t need to look through images that don’t relate.

Flickr is a very popular photography hosting website owned by Yahoo. There database is filled with images of pretty much everything including trains. Railfans took to flickr and have been sharing their images here for years. The pros of flickr can also be a con. There is no screening process, which means you may have dig through a few poorer images to find the gems you are looking for. Flickr does try to show the best and most relevant images to your search terms which helps greatly.

Not all images are geotagged but the ones that are have geographical identification metadata. This means that the location the image was taken can be mapped. Some cameras do this automatically, otherwise the user needs to add this information in Lightroom or in other programs. Both photo websites above utilize maps for geotagged photos and allow you to add location information on their site. 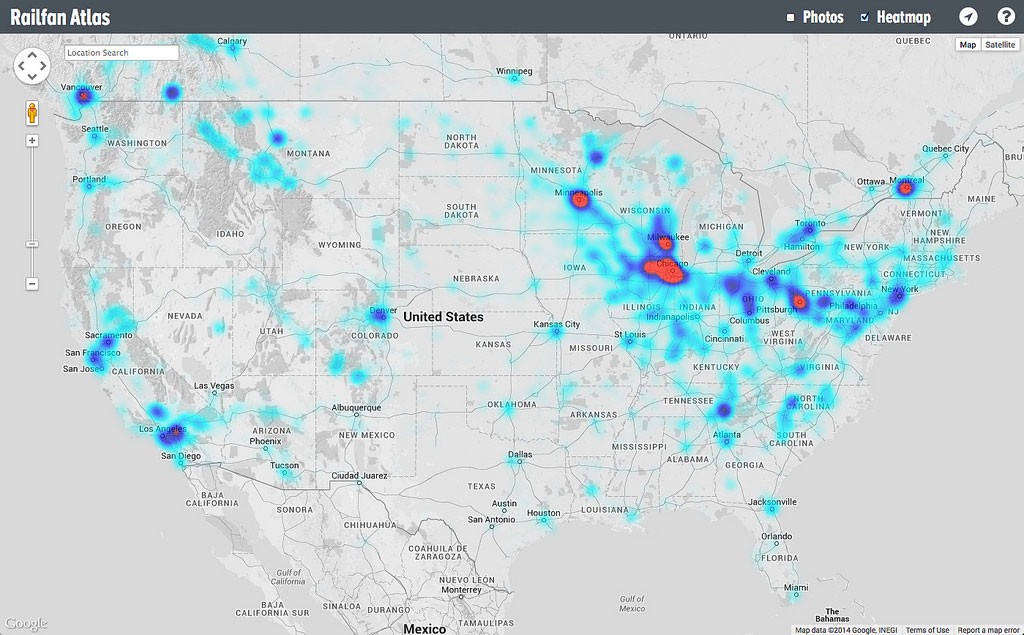 Railfan Atlas goes one step further by adding a heatmap feature which shows where the most popular photo locations are. This can be helpful when traveling to a new area. Railfan Atlas uses images from flickr that have been submitted to a special group. Learn more about it here.

Railpictures’ interactive map can search all the geotagged photos in their database by photographer, railroad, state/country, year, category, awards, and rating.

Flickr includes map features for geotagged photos throughout the site. You are able to see a map of just your photos, search all photos by location, or see all photos from a particular group on a map as well as singularly. 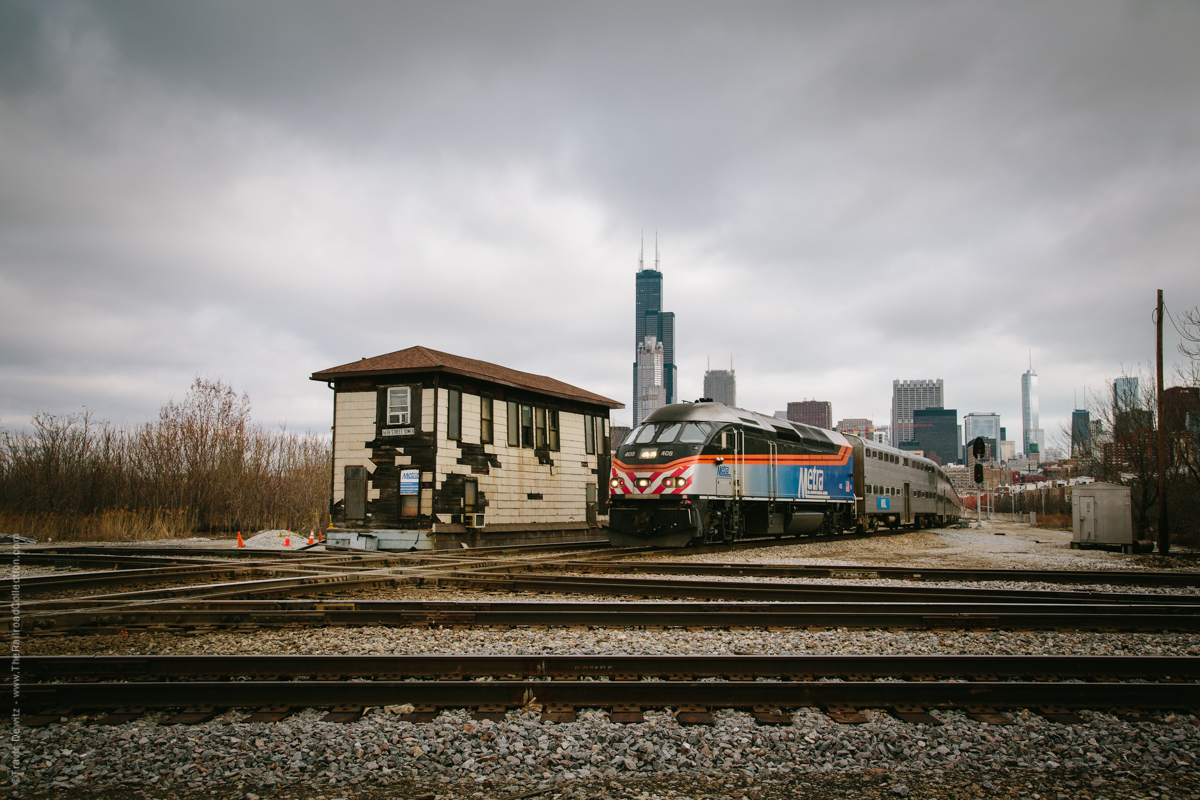 An inbound Metra train for LaSalle Street Station crosses the diamond protected by the 16th St. Tower outside downtown Chicago. The tower stands over the crossing of Metra’s Rock Island District over the St. Charles Air Line and former Illinois Central line west now Canadian National. The first tower was built here in 1901.

There are 1000’s of groups and forums online that cover every aspect of the rail industry and every area imaginable. I won’t even attempt to list them but will touch on a few. Trainorders is a well known paid forum that is a good research tool. Railpictures has an active forum more based on photo quality rather than research. Yahoo groups can be very helpful especially if you need to ask a specific question. Flickr groups can be very helpful, especially on a site filled with photos of everything. 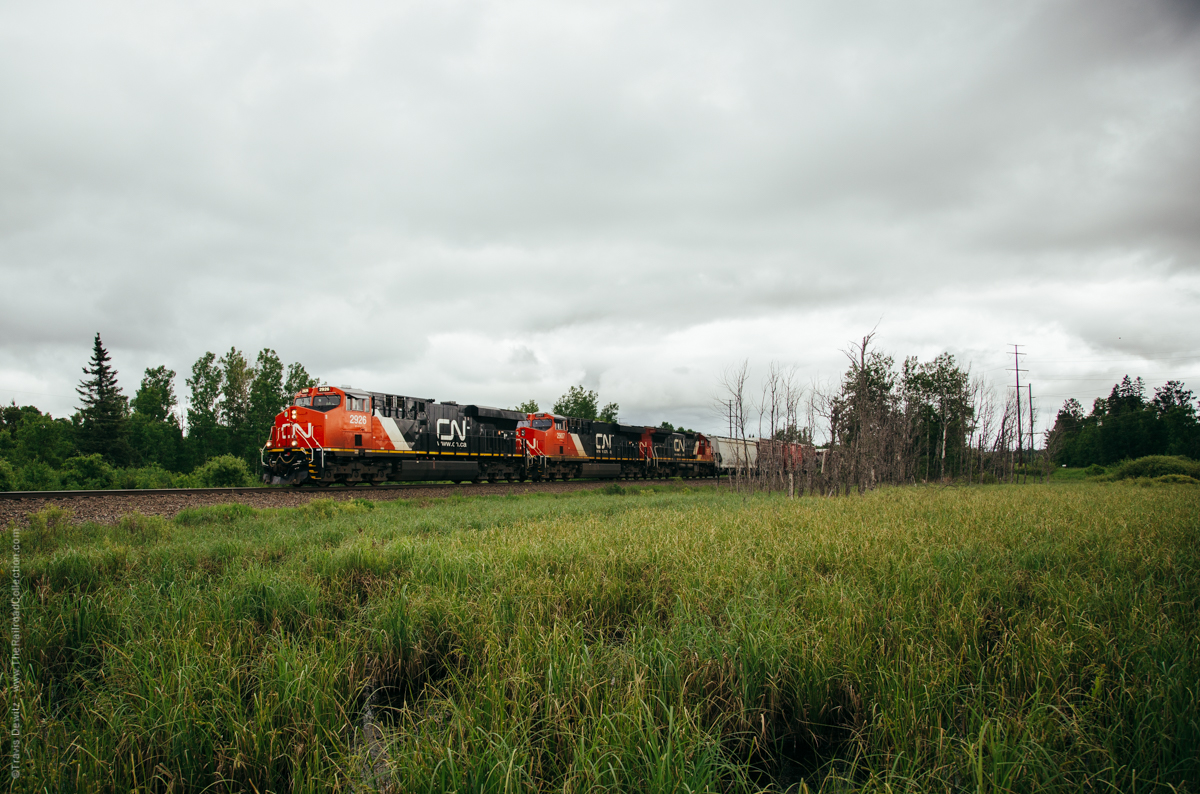 A trio of General Electric locomotives hustle this train north to Canadian National’s Pokegama Yard just southwest of Superior, Wisconsin. The history of this location is slightly complicated located here in Gordon, Wisconsin. Presently this is CN’s Superior Subdivision which is part of the Wisconsin Division. The Wisconsin Division is mainly everything that once was the Wisconsin Central that CN purchased in 2001. This is now CN’s mainline between the Twin Ports and Chicago that handles a lot of their Canadian traffic. At this moment, the front of this train is on ex- CNW trackage and the rear is on ex-Soo trackage. The ex-Soo rightaway ran north from Ladysmith to Gordon (where it crossed over the CNW) to Ambridge (halfway between Pokegama Yard and South Itasca, just south of Superior). The ex-CNW trackage ran north from Cameron through Gordon and into South Itasca. In 1985, the Soo Line bought the Milwaukee Road and sold off portions of its system in the state which formed the Wisconsin Central. The WC gained access to the Twin Ports with trackage rights over the Soo Line from Ladysmith north. There was a non-compete clause that agreement that stated that the WC could not ship CN traffic south out of the Twin Ports. In 1992, the Wisconsin Central purchased the 98-mile Cameron to Superior line from the Chicago & North Western for $5.8 million in an effort to be able to ship the Canadian traffic south to Chicago. After this sale, the Soo Line agreed to sell its line to the WC. Now with two lines to Superior, the WC joined them at Gordon using the ex-cnw line to the north and the ex-Soo line to the south. They chose to use the ex-CNW line for the slightly better grade. The ex-Soo right-a-way is now the Wild Rivers Trail and is just out of the frame to the right. The cement bridge abutments are still left standing just beyond the trees in the center of the frame where the Soo once crossed over the CNW. The third unit in this consist is an ex-CNW C40-8 which may have o 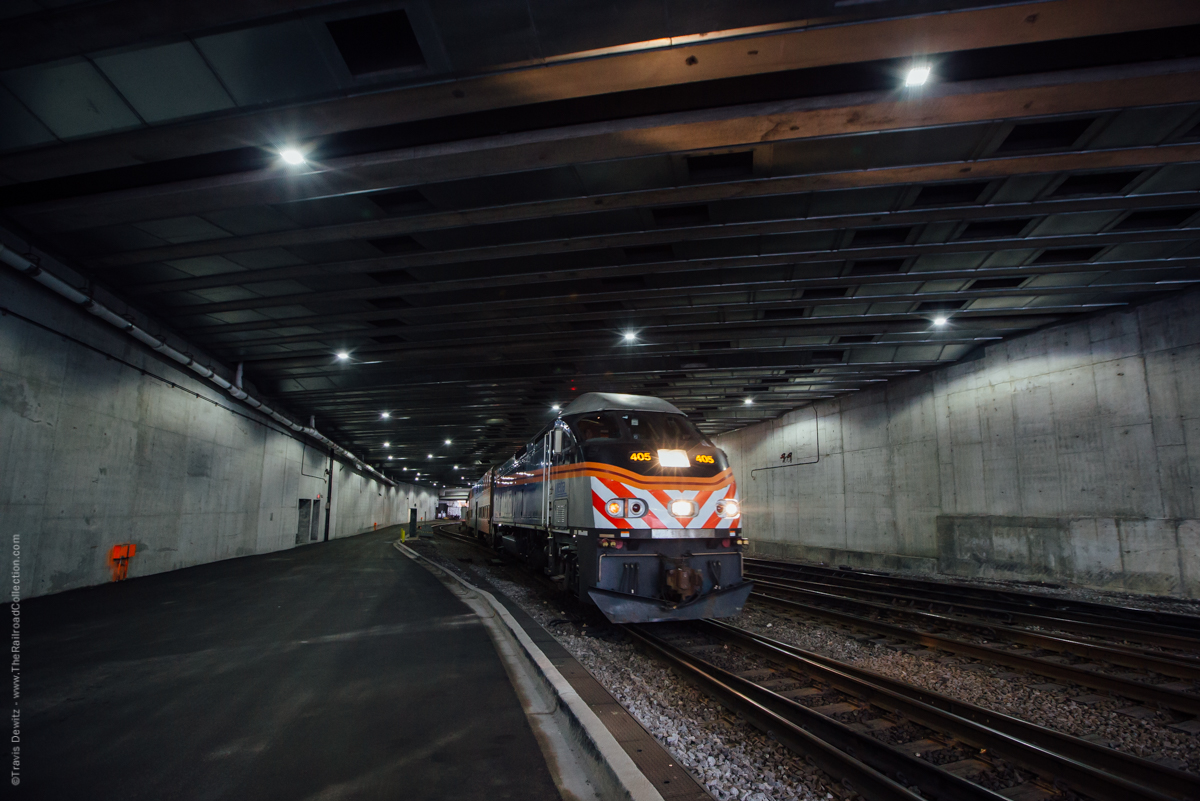 An outbound Metra passenger train departs the northside of Chicago Union Station. This view is from under the new River Point office building construction. This will be a 52 story ultra modern office building located at 444 West Lake Street. River Point sits over the tracks in a triangle shaped parcel that is between Lake St., Canal St. and the Chicago River. The south side of this tower now stands were Amtrak’s Lake Street Tower once stood. Metra 405 is about to hit daylight and cross over Canal Street.

Frograil Rail Tours are an amazing resource online. They offer state by state user submitted tours of railfan locations and cities. Some of the tours are basic and simple while others give you turn by turn directions and information of specific areas and railfan locations.

You might not be able to read them online but you can buy them. Seriously though, Google Books gives you access to books that have been digitized and are available online to read. This can be a great resource, but beware that some books only give you a limited preview. Below I will list a few of the tools that I use.

I hope these websites help you on your next research project and I would love to hear about your favorites in the comments below.