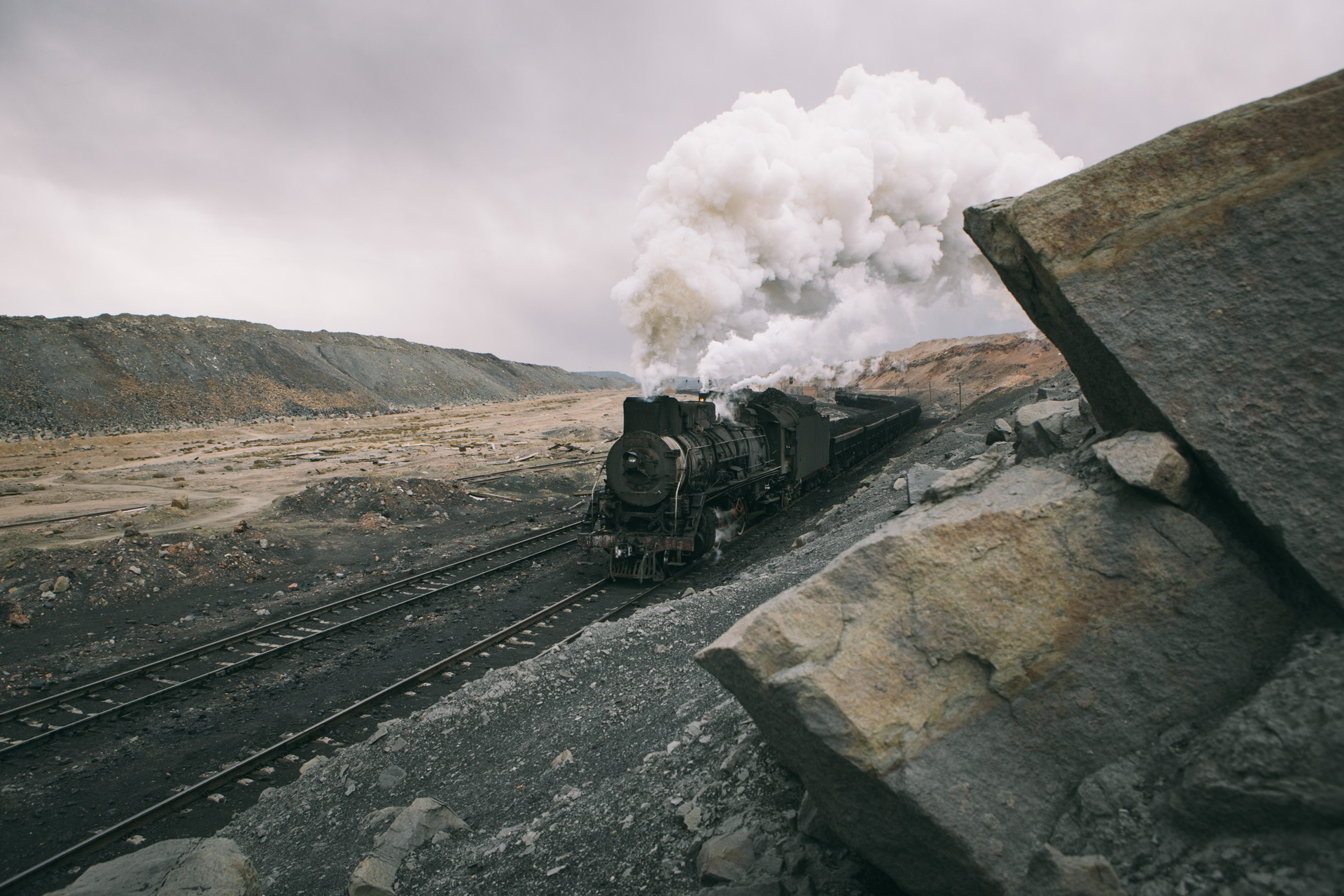 Loaded steam train climbing out of the inactive east open pit mine.

Rough flight path between Chicago and Beijing to Hami.

In the dead of winter, a friend and I boarded an American Airlines flight to China. It was January of 2018 and we were headed to the coal mining town of Sandaoling in the Xinjiang Uyghur Autonomous Region of western China. Sandaoling is located just south of the Barkol Mountains, part of the well known Tian Shan Range. This arid region is part of the western edge of the vast Gobi Desert. The nearest city of Hami, is an hour or so to the east. 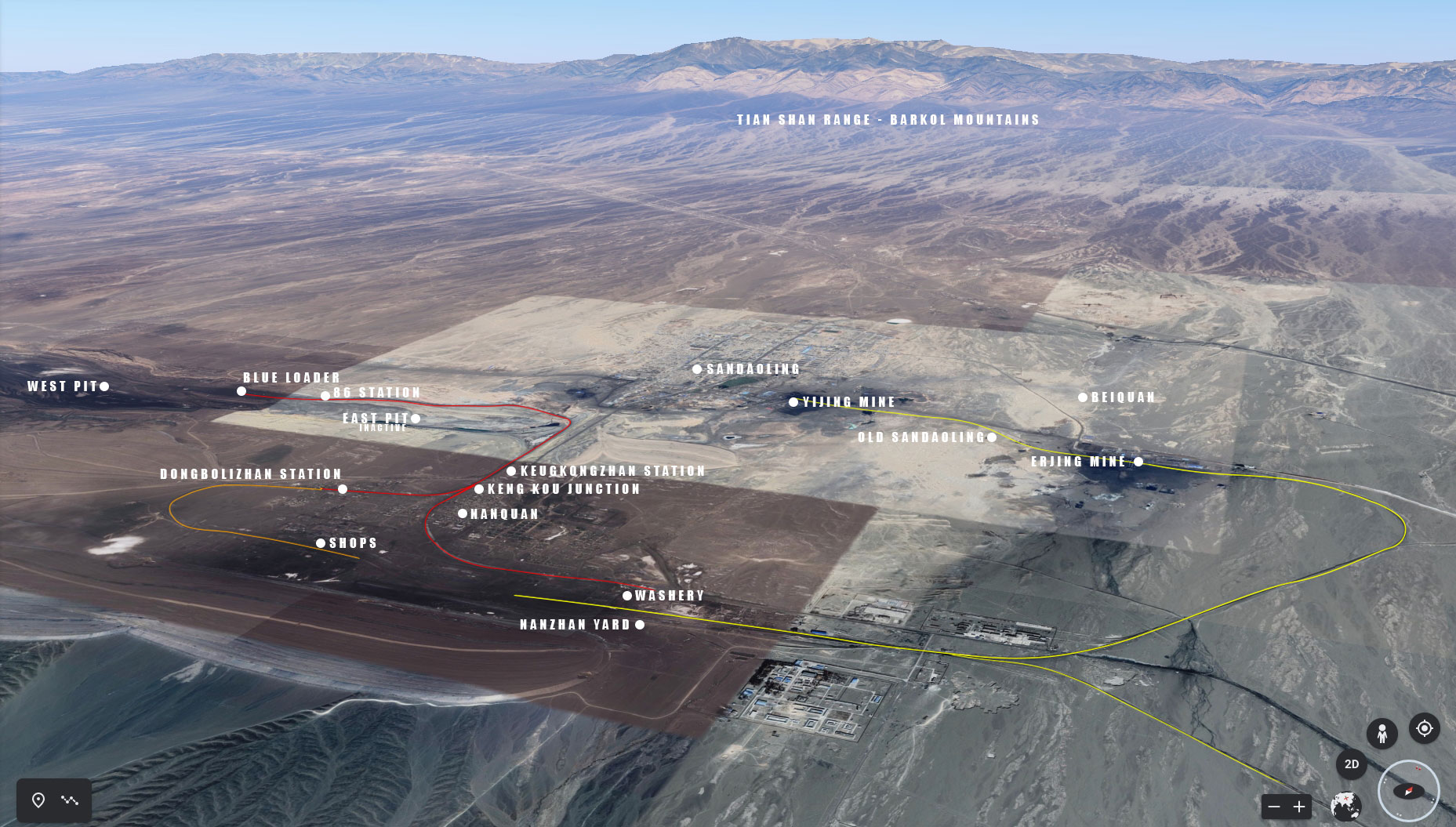 We took a flight out of Chicago which took a flight path over the artic circle to the other side of the northern Hemisphere, landing in the capitol city of Beijing. We weren’t here to see the usual tourist attractions and wasted no time to catch the next available flight early the next morning, west to Hami. A few hours later and we were a short taxi ride from Sandaoling to see the last revenue steam trains in the world.

Once we arrived in Sandaoling, we met our guide Jun at the hotel we would be staying at for the next two weeks. The temperature never rose above freezing and was often subzero. The cold brisk air was filled with the sweet smell of coal smoke from nearby restaurants and chimneys. Perfect weather for photographing steam locomotives pulling heavy coal cars out of the mine creating big white plumes of steam trailing behind the trains. The Sandaoling Coal Mine Railway and other industrial operations were located just south of town. 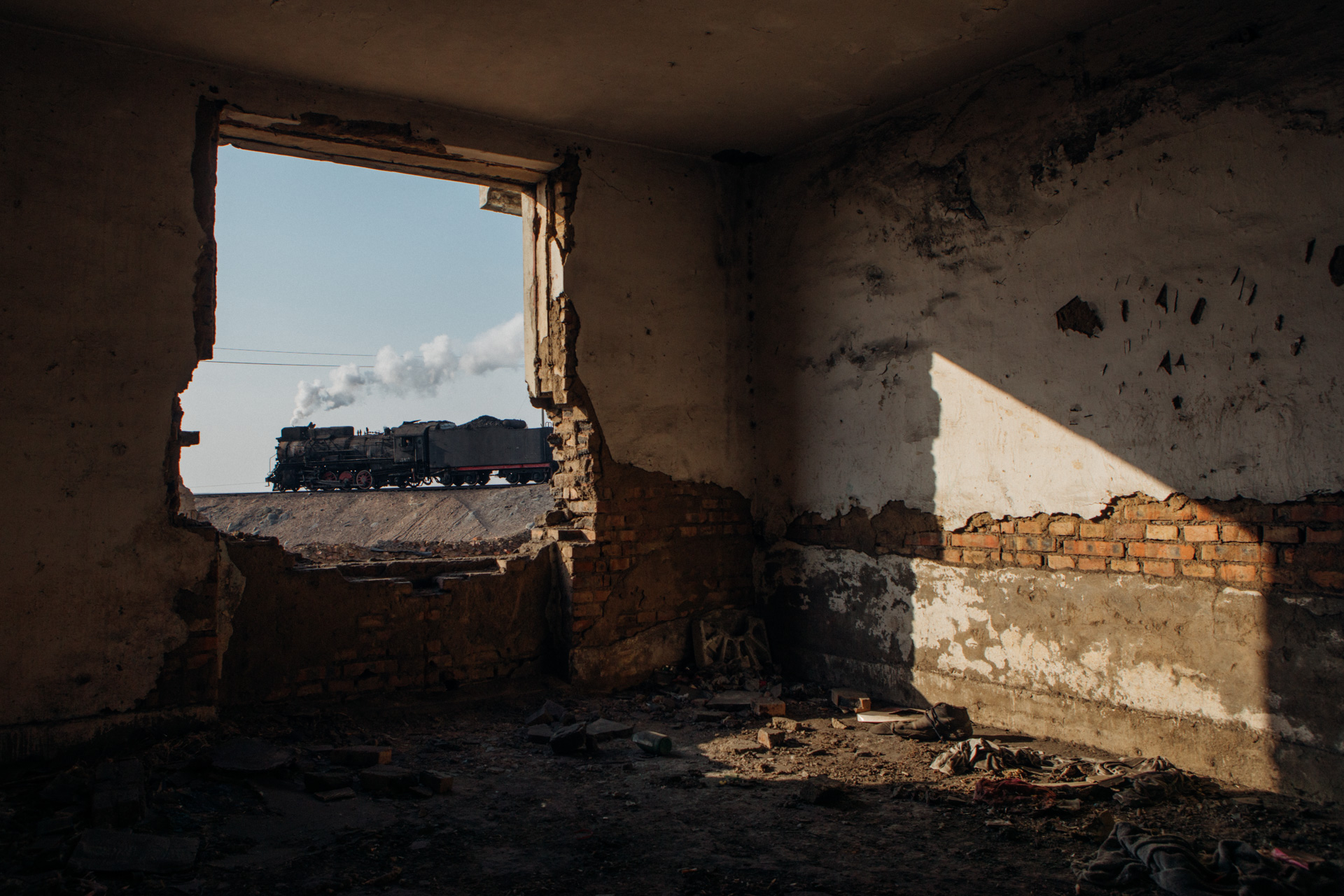 Sandaoling Coal Mine Railway steam train passing by abandoned apartment window on the way to the washery. 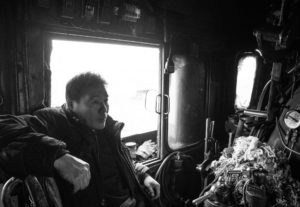 The basic operations of this railway was to load with coal from the blue loader located on the edge of the west open pit mine. Once loaded, the trains would make their way east past the old east mine where the tracks would turn 90 degrees to the south for the big climb out of the pit. Once out of the old pit, the train would continue south straight through the junction to Dongbolizhan Station to the washery at Nanzhan. At the washery the coal would be dumped from the side dump cars to underground conveyors that lifted the coal and moved it into the coal sorting yard. The coal would then be sorted by size and then loaded into the larger gondolas used by the China Railway. Diesel powered trains would than transport the coal east across China. The unloaded steam train would now push backwards towards the mine to repeat the cycle. The rear hopper had a cab with a roof mounted mechanical signal arm for the crewman to communicate to the headend of the train. This cycle would run around the clock 24 hours a day. 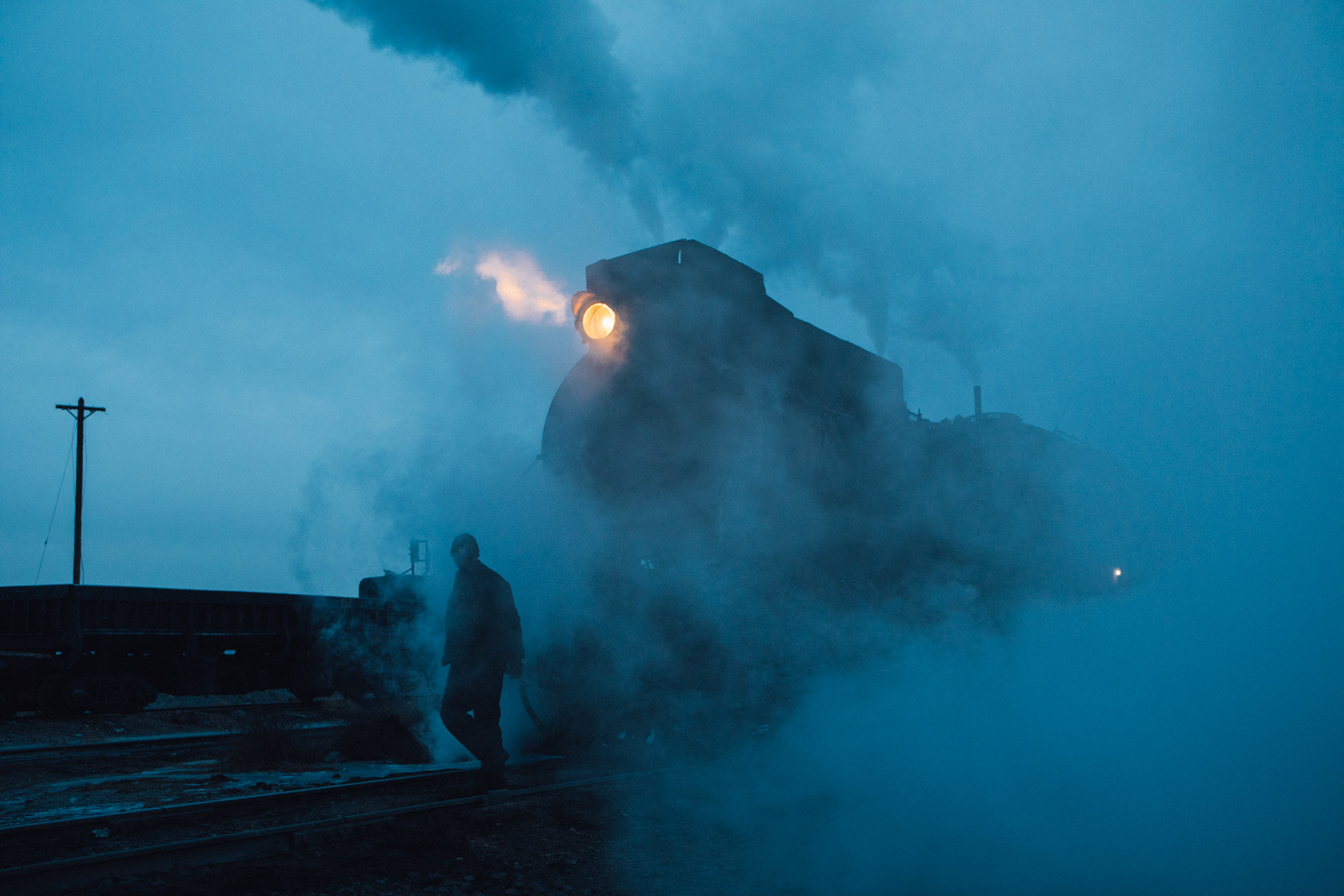 We started every morning well before sunrise with a breakfast of fresh handmade noodles with an hardboiled egg and vegetables cooked on a coal fired oven. We would head to Dongbolizhan Station after breakfast to catch the crew change. The trains would come into the station one by one and incoming crews would inspect, grease, and oil them. Once ready the trains would back there tenders under the water spouts to fill with water before heading down to the mine. Once at the mine, they would load the tender with coal with a front end loader before backing under the blue loader to fill the hoppers. We had great access to most parts of the railway to take photos throughout the day into the night.

One day half way into our stay, we had the opportunity to visit the locomotive shops were all major repairs would happen along with some rebuilds. The shops was one of most interesting places we were able to visit. We also photographed the steam trains that ran east out of Nanzhan yard and then north to the Erjing Mine. These trains used the larger China Railway hoppers, so they didn’t have to transfer the coal. 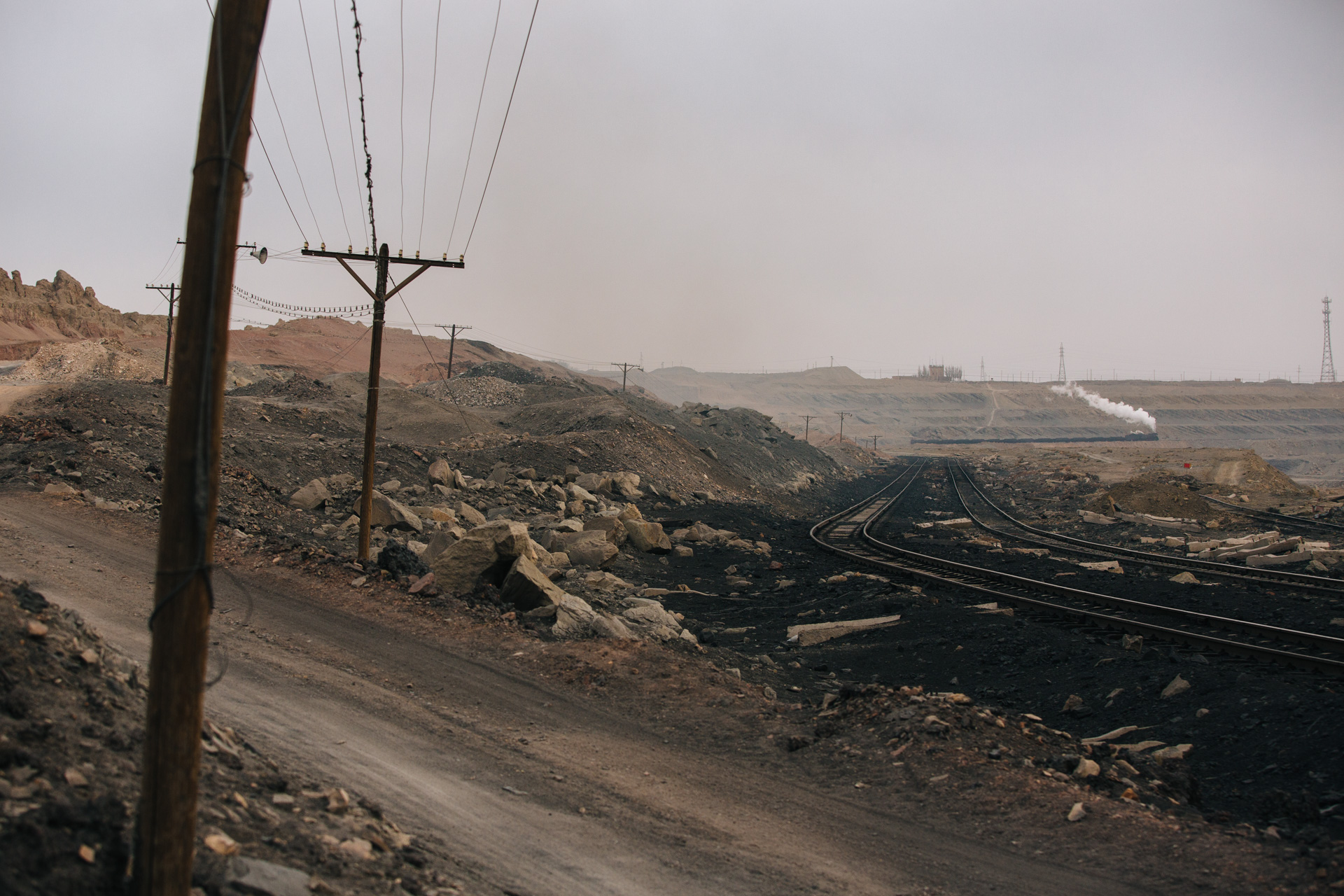 Steam train in the distance climbs the grade out of the coal pit. 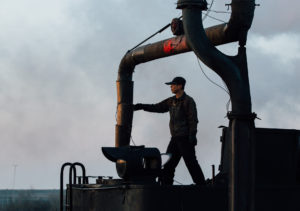 Two weeks flew by and we were soon back to the airport in Hami to start our journey back to the United States. It was an once in a lifetime experience for me and I would love to go back but the operations is set to end this year. The Sandaoling Coal Mine Railway has been scheduled to be shuttered multiple times but the deadline keeps being extended so only time will tell when the rein of the last steam trains in the world will end and their fire boxes turned cold.

Photographs can be purchased here of the Sandaoling Coal Mine Railway.