History of Eau Claire’s Main Bottleneck of the Northside 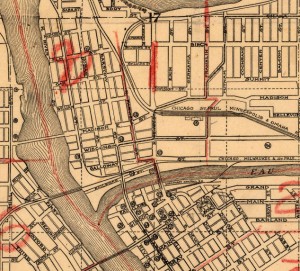 A spectacular scene of loggers and voyagers were once an integral part of the roots that framed the city of Eau Claire, Wisconsin. Timber from the north once filled our rivers as this rich heritage was influenced by the steadfast logging industry. Incorporated as a city in 1872, Eau Claire grew from the shores of the Chippewa and Eau Claire Rivers. Downtown sprang up around the confluence of the two. Sawmills and lumbermen were plenty in the early days of this growing community located in west central Wisconsin. The first train arrived here in 1870 and by 1882 three different railroads had tracks laid here.

The geography of the area was carved out by the rivers which left steep terrain throughout the area. One of these slopes was conquered by two roads that met perpendicular to each other about 3/4 of the way up. This intersection of Madison Street and N. Dewey Street was cut through the center by multiple tracks of the busy Chicago, St. Paul, Minneapolis, and Omaha Railway. This daring intersection was also the main thoroughfare between the North Hill and Chippewa Falls and the rest of the Eau Claire including the business district. Around 1926 this became the route of State Highway 53 between La Crosse to the south and Superior to the north. The main route from the north through followed west on Omaha St., South on Putnam diverged onto Fay into Franklin, west onto Madison and south to N. Dewey which 53 continued through town. (see map insert)

It was conceded by all concerned that the crossings are very dangerous to public travel. Railroad Commission of Wisconsin

This route laid home to the streetcar line; the once horse-drawn streetcar line was converted to electric in 1889. The Electric Car Interurban Service operated under Chippewa Valley Electric Railway Co. which began in Eau Claire, WI, in 1889. Arthur Appleyard, a wealthy Boston financier merged the Eau Claire Street Railway Company with the owners of the Chippewa Falls Water Works & Lighting Company in 1898. The line served much of Eau Claire and ran north through Hallie and into Chippewa Falls. Later this line would be extended east into the city of Altoona.

The tracks that cut through Madison and N. Dewey hosted over 30 trains a day including the famous Chicago & North Western’s “400” passenger train. East of the crossing was the Eau Claire Depot which caused trains to stop and block this intersection. This was the location of a small yard which in the later years handled some of the Uniroyal Tire Plant’s freight. CNW’s main yard was located further east in Altoona. 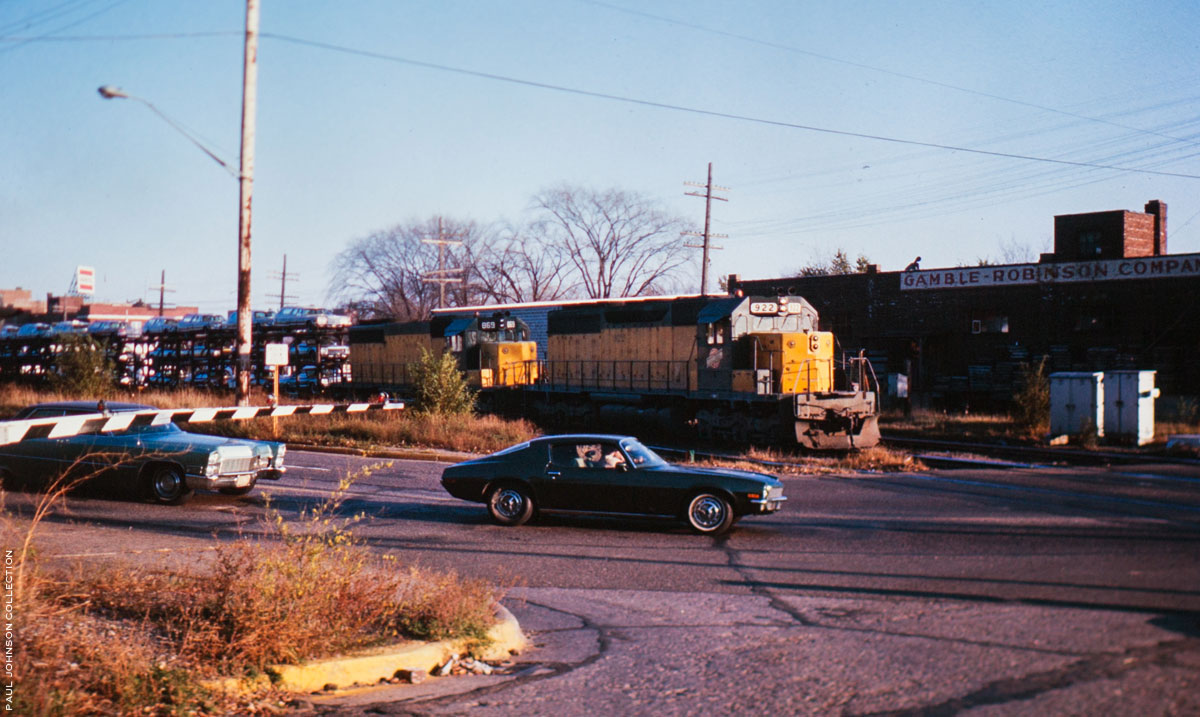 Talk to fix the hustle and bustle of this dangerous intersection was started back in the early 1900s. They planned for N. Dewey Street to tunnel under the tracks and make connections with Madison Street. This work included Putnam Street which crossed the yard tracks on the east side of the large passenger depot. The job had of work completion deadline of May 1, 1915. This construction project was never completed or even started without explanation as to why. Through diligent research I read from, Opinions and Decisions of the Railroad Commission, Volume 15, By Railroad Commission of Wisconsin, the project seemed like it was already green lighted. 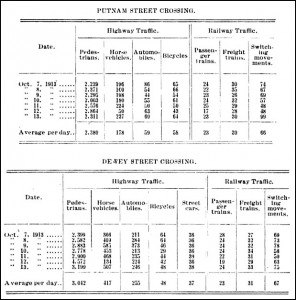 A traffic study was made at both crossings continuously for a week in October under the direction of the city engineer, the results of which are summarized in the following tables.

“The Commission on its own motion investigated two grade crossings on the line of the C St PM & O Ry Co at Dewey street and Putnam street in the city of Eau Claire. It appeared that the two crossings in question afford the only means of access from the southern portions of the city to the North Hill district a section with a population of approximately 4,000 persons west of the Putnam Street crossing which crosses seven tracks the tracks curve northward around the foot of a bluff. At the Dewey street crossing which is used by the Chippewa Valley Ry Lt & P Co’s interurban line to Chippewa Falls four tracks are crossed. It was conceded by all concerned that the crossings are very dangerous to public travel. After numerous conferences between the engineers of the Commission the city the C St PM & O Ry Co and the Chippewa Valley Ry Lt & P Co, a plan for the separation of grades was formulated. This plan was acceptable in its general outlines to all parties and forms the basis of the present order. It is ordered that the highway grade crossings at Dewey Street and at Putnam Street in the city of Eau Claire and on the line of the C St PM & O Ry Co be closed and that a subway be constructed at Dewey street and an overhead passageway for pedestrians at Putnam Street in conformity with the requirements specified A new street with detours to North Dewey Street and Madison Street is to be constructed in the manner specified from the north portal of the subway in a northeasterly direction to an intersection with Madison Street. The city of Eau Claire by appropriate action is to take certain steps as necessary in the carrying out of the grade separation. The city is to vacate the portion of Putnam Street which lies within the railway company’s right of way. The city is to pave the floor of the subway, the sidewalks in connection therewith, and the streets altered or constructed under this order. The city is to assume responsibility for all damages to property resulting from changes in streets and crossings under the order subject to right of intervener on the part of the railway company and the Chippewa Valley Ry Lt & P Co The city is to grant its permission to the latter company to make all necessary changes in its tracks and distributing system so that it may operate its cars along the new street and through the subway and that company is to make such changes and also to pave such portions of the street as it is obligated to pave. Notice of necessary obstruction in any public street is to be given to the city. All work is to be subject to approval by the commission and where not specifically assigned to the city or the Chippewa Valley Ry Lt & P Co is to be performed by the railway company. Upon completion of the work the railway company is to obstruct the grade crossing at Putnam Street so that it cannot be used by the public and the city. The Chippewa Valley Ry Lt & P Co and the railway company after the adjustment of damage claims are to furnish the Commission with a complete account of the expense incurred whereupon the Commission will determine and apportion the actual total cost 25 per cent to the city, 25 per cent to the Chippewa Valley Ry Lt & P Co, and 50 per cent to the railway company. The work is to be commenced immediately and completed on or before May 1, 1915 subject to additional allowance for certain contingencies In re Crossings on C St PM t 0 R in Eau Claire.” – Opinions and Decisions of the Railroad Commission, Volume 15, By Railroad Commission of Wisconsin

Madison Street Hill – Before and After Grade Separation – Looking Northeast

The streetcars ceased operations in 1926 which removed one component from the mix. The “Eau Claire bypass” via Hastings Way, was completed in November of 1956, removing Highway 53 from the downtown district. This bypass made a connection at Birch Street which caused Birch Street to be the main corridor towards the Madison/N. Dewey Street intersection instead of Omaha Street. This new river crossing did indeed divert a lot of traffic away from this intersection, yet traffic levels were still high. Stories from many locals say their biggest fear was to be stopped by a train while driving a stick shift, heading north. Trying to take off after the train has passed from this steep approach without rolling back into other cars was terrifying to many. The other fear was attempting to climb this hill in the winter months as traction was very poor.

It wasn’t until 1977 before the actual grade separation started in which construction lasted into 1978. Instead of a tunnel, a railroad bridge would be built over Madison Street. North Dewey Street would be severed with cul-de-sacs at both ends. The Chicago & North Western would build a shoofly track to the north of the original alignment and the mainline would be pulled up and hillside dug out. Once the hillside was fully opened up, the bridge would be built in the opening and tracks relayed. With this finished, the shoofly would be removed and north side of the bridge would be dug out to make the new lanes of Madison Street. Madison Street Hill is still a fairly steep climb, but more gradual with no intersections to contend with.

Downtown Eau Claire today still has elements of a vintage heritage; yet it is laced with new revitalization projects that enhance its main street appeal for the 21st century. The river is still the central backdrop that ties a growing community together with its remarkable history of the once spectacular scene where lumberjacks called home. 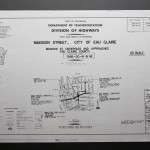 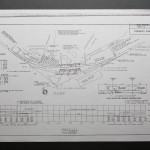 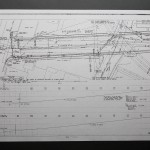 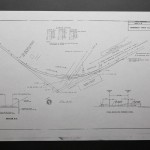 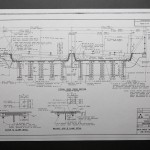 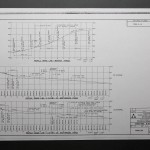 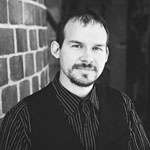