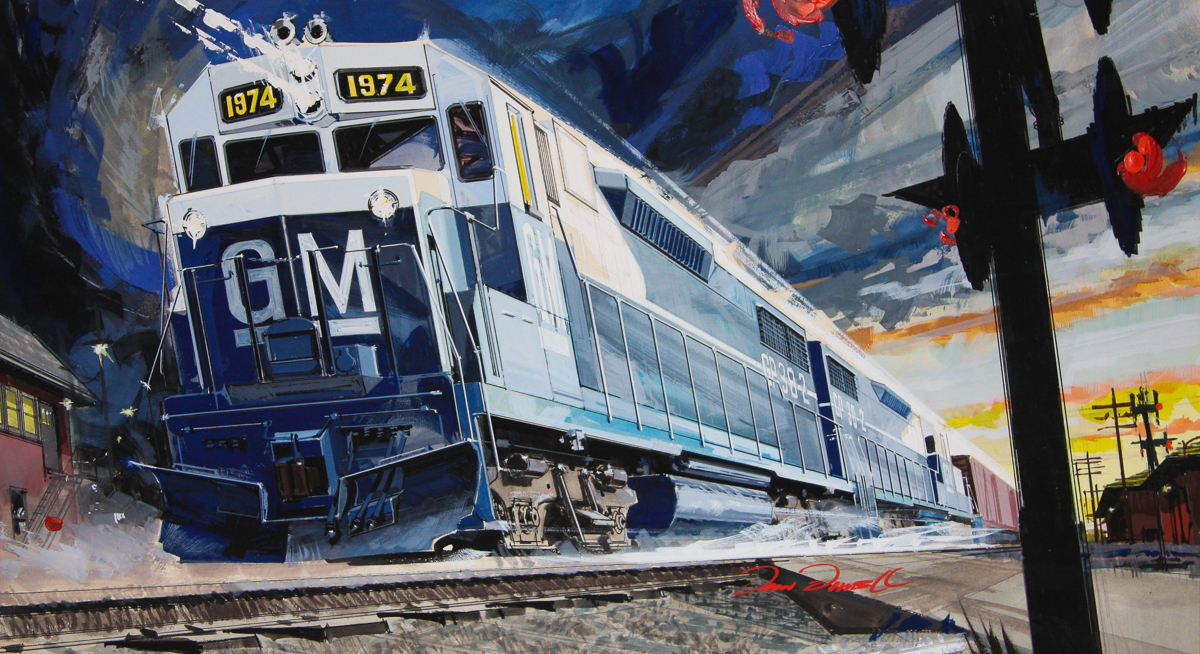 I fell in love with the railroad paintings of famous Electro-Motive Diesel artist Tom Fawell after I read the Classic Trains article, by Gregory Palumbo (link to article below). Tom’s work really moved me. I love the implied motion and speed he adds to the locomotives; their forward leading lines and paint swirls of wind and dirt blowing out of the way. His vibrant colors create a surreal feel to his works.

You can never stop listening to your “instincts” and what your gut is telling you, your “instinct” should overrule everything. Tom Fawell

A large collection of his EMD work has a darker mood to them that I feel captures the mood that surround railroads. This mood is similar to what I work to capture in my images, but rarely seen in commercial advertisements of the late 60’s when Tom got his start with EMD.

Through a little luck, hard work and perseverance by my girlfriend, Bobbie Sue, I was able to meet Tom and we have remained friends since. He use to live in West Chicago, which Tom described in his presentation for the Center for Railroad Photography and Art, “The town was and kind of and still is a “Railroad Wonderland” that included a “round house” maintenance shops, bunk houses, 2 or 3 water tanks, two 24/7 manned signal tower buildings , two “gate” 24/7 manned towers, a staging area for the “commuter trains, a jungle of signal towers and a major crossing of the C&NW main lines by the EJ&E.” 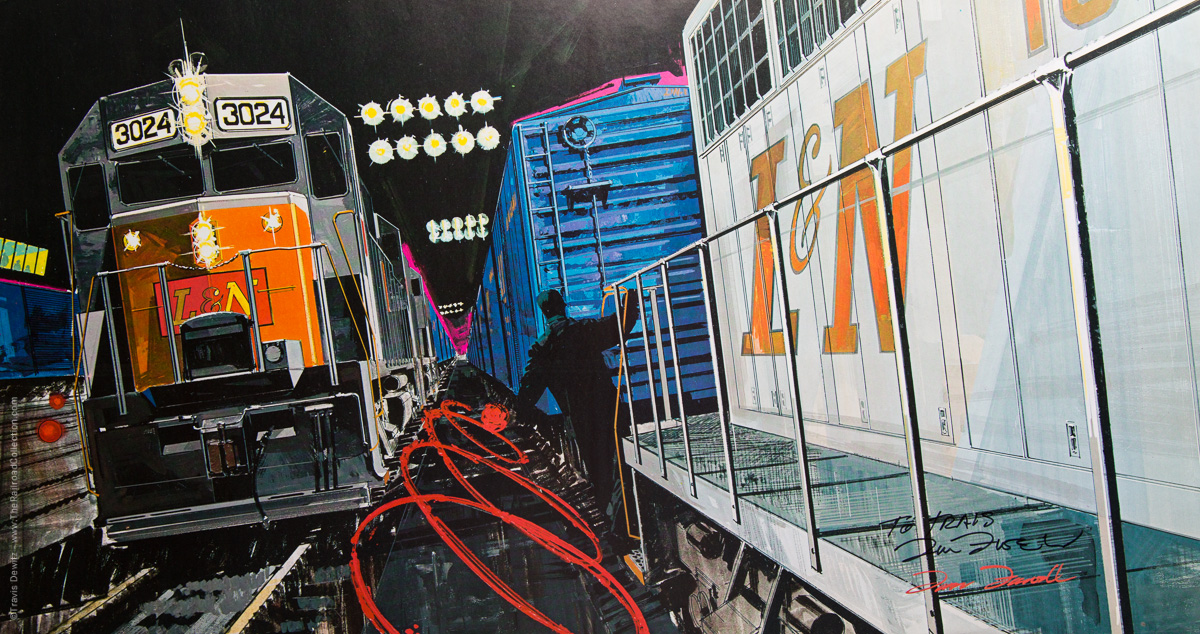 This is how Tom describes the start of his relationship with EMD, “An account rep, John Callahan, from the Marsteller Agency noticed my work and contacted us and indicated that he thought my work would be a good fit with one of their clients …. Electro-Motive Division of General Motors. We all thought so too. He gave me the specs for the ad, various blue prints of the locomotive, some rough copy, and said “do what ever you want”, music to any artists ears.”

The presentation didn’t go too well. In fact they laughed at my work. “It has no wheels”, “the sky is too rough”, “the train looks like it’s going to fall over” Tom Fawell – Electro-Motive Division of General Motors Office

Tom told me that meeting didn’t go very well and his comprehensive layouts were thrown in the trash. He said some how those comps made it “upstairs” in EMD’s corporate office and the rest is history. After the first Ad hit and the readership shot up, … it was a long long love affair between EMD, Marsteller, and most of all with Tom. 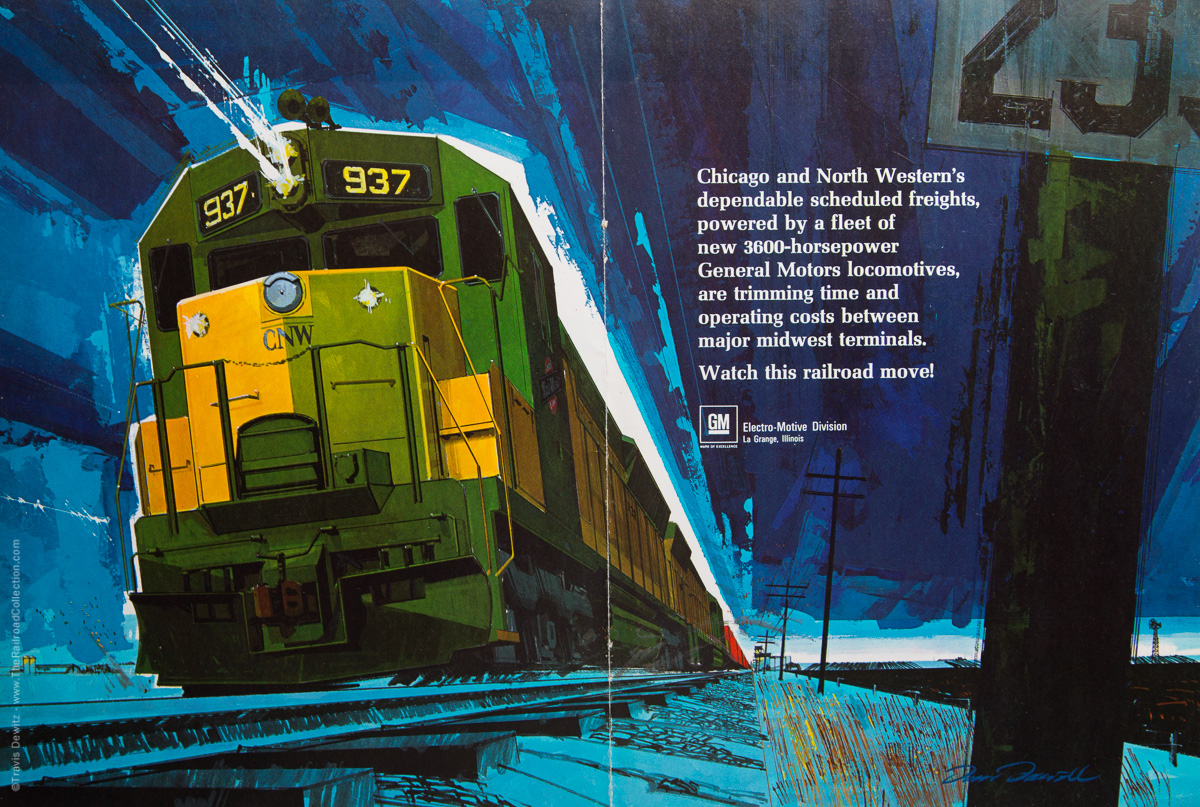 Tom explained the process for new artwork went like this: Marsteller’s art director would call requesting a new ad was needed in 60 days or so in the future. The new ads were usually coordinated with the placing of an order by a railroad for EMD locomotives.  Tom told me about how he sometimes would tour the railroad to get a feel of what they were all about. He would even be able to jump in the cab of a train to experience the railroad with a front seat view. Tom continued saying that he would than meet with Marsteller’s art director, account manager, and at times with the copy writer. He would come up with 3 or 4 thumbnails and they would all meet again and they would pick one. He says it didn’t matter to him which one, because he liked them all. He would then do a chalk comp according to which thumbnail they picked. He would then matted up and cellophane the comp and deliver to Marsteller. Once he got approval from Marsteller and EMD, he would paint the painting. It took on average 60 hours to complete the ad piece before it was delivered. 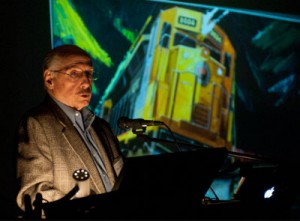 Tom jokingly says, “I knew I was going to be an artist very early ‘Cause I could do it better than anybody else, and it was easy. I remember my first grade teacher told me I was a good artist. I told her, “I know.” He continued about his beginnings as an artist, “My formal art training, other than just drawing or scratching on anything I could find, was when I went to the Chicago Art Institute at the age of 19. I liked the Art Institute, I pretty much did as good or better than most of the class. I was probably the best in drawing the figure. I liked it, I got good grades, but something was missing, I wanted to know why I was doing what I was doing. What could I do to make things work and look better. When I looked at what I did, or if I looked at the great masters or good commercial work. I asked myself why did they do it this way and not that way? No one would answer my questions. “Just keep doing what you’re doing Tommy.”

I landed with $7.00 bucks in my pocket. He was right, my first day at Pratt was like coming into the sunshine after being underground for a long time.

“Half way through the first year I quit out frustration and went to work on a construction cement gang. I then started laying brick which paid my way through school. At the time an uncle of mine was an industrial designer and grabbed me one day, he said, “what the hell are you doing? Go to Pratt Institute in New York, it’s the best, you will not regret it.”  So off I went, landed with $7.00 bucks in my pocket. He was right, my first day at Pratt was like coming into the sunshine after being underground for a long time.  For the first time I really started to understand.  I realized that art is (among other things) a science, it has rules, it has discipline, right and wrong, it has structure, it is a science, just like music, literature, dance and all the other arts, there are certain basics you must know and understand. It was like taking a bath.” The first day the professor said, “ that for the next 3 years we are going to tell you what we want you to do, and we are going to give you all kinds of rules, regulations, facts, and figures and many other directives in the area of the creative arts, and you better follow them to the letter, did you hear me!.. to the letter” ….. and then…. He went on to say,… “when you leave here, we want you to spend the rest of your life doing your very best to bend and/or break all those rules and regulations that we will give you. A lot of the above I knew by instinct, and I think, in time I would have arrived at the same point, but at a much slower pace.”

Tom continues to do art as a sincere passion, he has never considered it a job. Paintings done by him hang on wall around the country. Even though he is very well know in the railroad community for his EMD work, he was commissioned by Iowa Interstate to do a painting of one of their new General Electric locomotives in 2008. An interesting fact was that he use to use a pen name for some of his different artistic styles. It was less confusing for clients that wanted a different look then his known bold designs.

Tom still has a few autographed prints for sale. The details are on the Tom Fawell – Artist Facebook Page. You can also view some of Tom’s other work there as well.

Some of Tom’s other artwork that appeared in print ads.