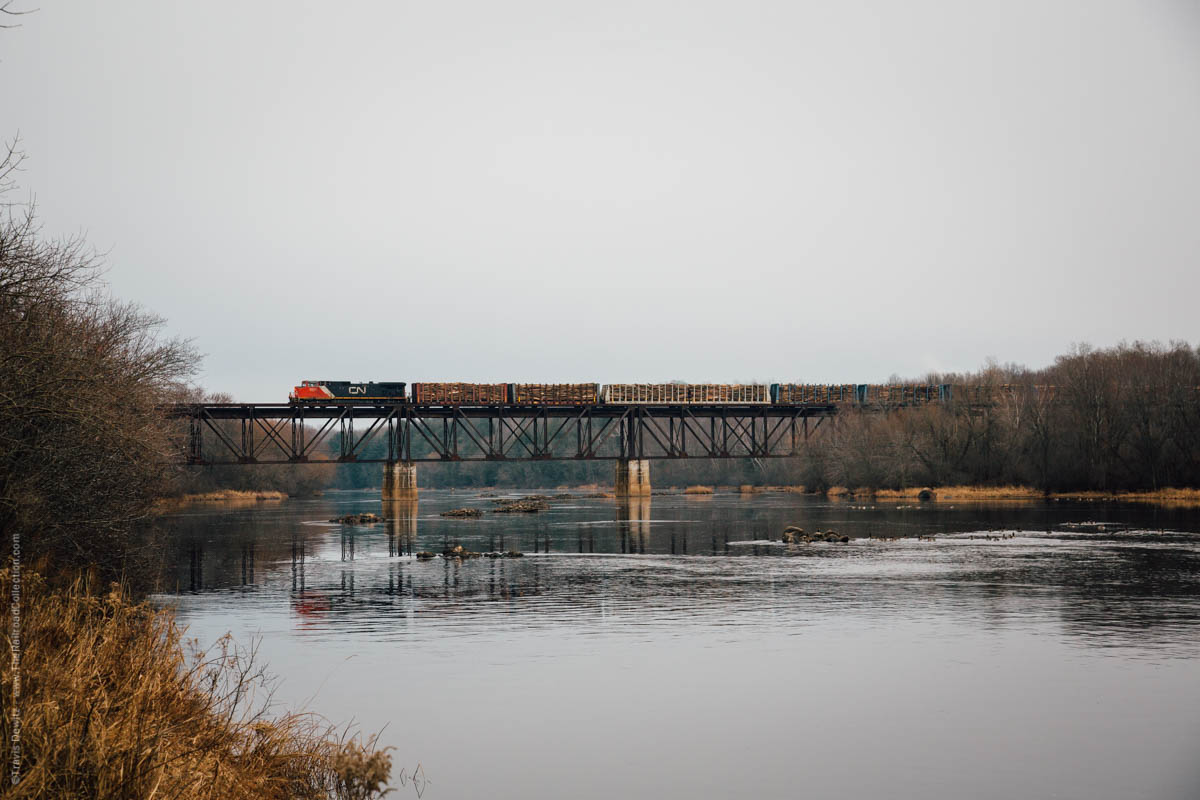 A lone Canadian National locomotive pushes a large cut of bulkhead flat cars loaded with logs over the Flambeau River. They will cut off the three rear cars at Besse Lumber Company just south of the river before heading back north on the Superior Sub. 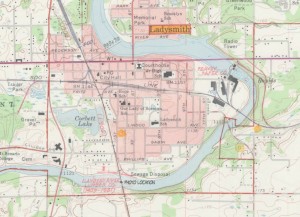 Logging in northern Wisconsin was booming in the 1880’s through the early part of the 1900’s. This industry isn’t anywhere near what it once was, but is still present throughout the state. In 1840, Rusk County was covered with six million acres of white pine and hemlock covering most of the county. With river networks being the most common way to get logs from the forests to the mills downstream, Rusk County was in a good spot with two major flowages, the Chippewa and Flambeau. The mouth of the Flambeau River opens into the Chippewa River about twenty miles downstream of present day Ladysmith, located almost dead center in the county. This was the location of the natural Flambeau Falls which would be the original name of this logging community and was an ideal spot for the lumber industry as well as floating logs down to mills at Eau Claire and Chippewa Falls.

In 1885, the Minneapolis, St. Paul, and Sault Ste. Marie Railroad (Soo Line) built a station here on their east-west line between Sault Ste. Marie and Minneapolis. This was the main artery in which to bring in new settlers and the population starting growing quickly. Robert Corbett built the first sawmill here this same year along the south shore of a small lake near the train station. The community became known as Corbett when the post office was established here in 1887, but the railroad continued to list the station as Flambeau Falls until the railroad renamed the station to Warner in 1888. Ladysmith was adapted as the new name in 1900 as it is still named today. Six years later, the Wisconsin Central Railway laid tracks north to south connecting Duluth and Chicago, crossing over the east-west line in Ladysmith. This would soon be a part of the Soo Line system as well.

It was originally named “Flambeau Falls” after the Ojibwa name for the area, Gakaabikijiwanan (“of cliffed rapids”). Wikipedia 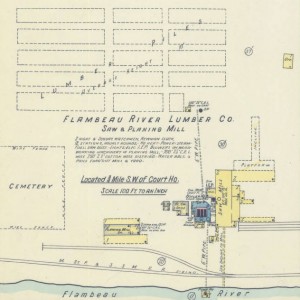 The Flambeau River Lumber Co. was once one of the largest sawmills in Northern Wisconsin. They bought the old, outdated Corbett Mill which they used until the new mill was built on the north side of the Flambeau River just south of Ladysmith and the old mill. Rock piles in the river were used to anchored the boom chains which held back thousands of logs to be sawed by the Flambeau River Lumber Co. This large sawmill ran at this location from 1911 until 1927. It was idle the few years before it burnt down in 1931. Logging is still a part of this area, but nothing like it once was. Besse Lumber Company is located on the south side of the Flambeau River and still receives shipments by rail. Indeck Bio Fuels plant produces wood pellets which is located near Besse Lumber Co. as well as P.J. Murphy Forest Products. The CelluTissue Paper Plant  is located on the river on the west side of town. Bulkhead flatcars cars are still loaded with logs on the northside of town in a small yard along the Superior Sub. Canadian National operates both the north-south and east-west lines that still dissect Ladysmith. The north-south line is Canadian National’s mainline into the Chicago market from Canada. The rail line west was recently rebuilt and put back into service for the rise in silica sand mines in western Wisconsin.

Click here to see the aerial view of the boom chain rock piles in the river.