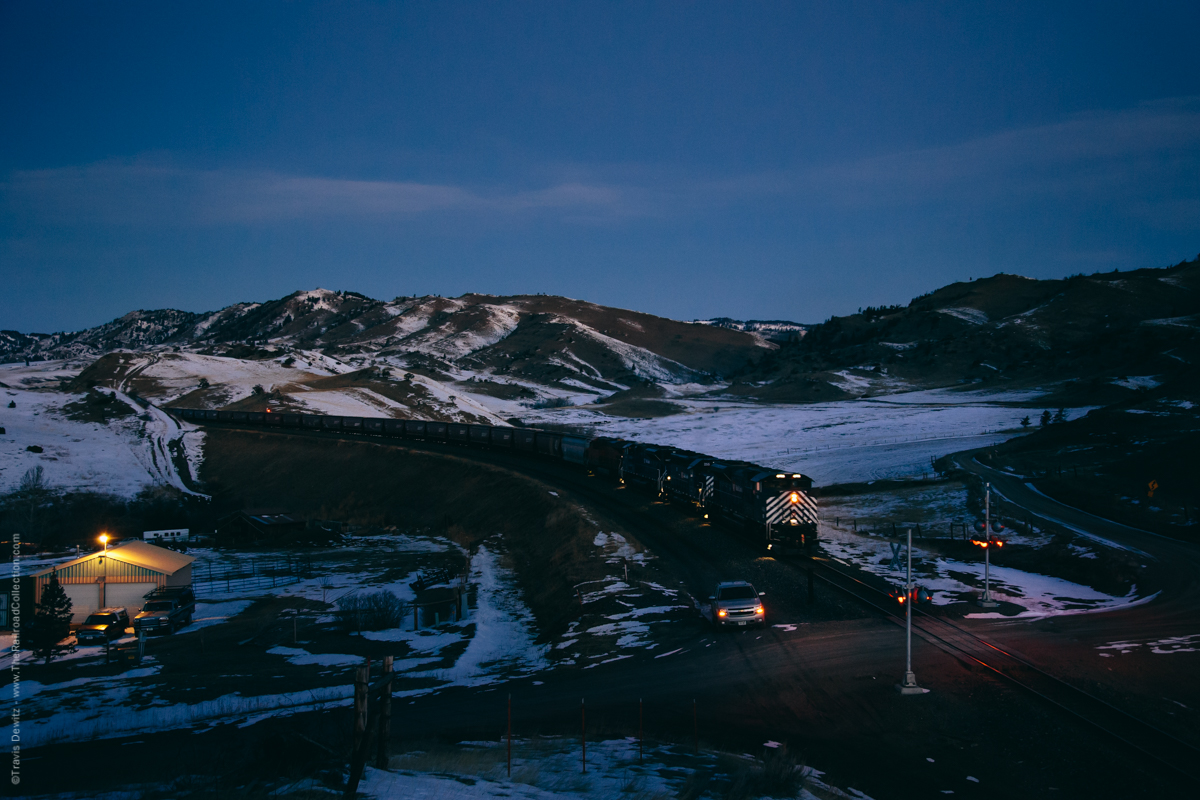 On July 15th, 1806, part of the Lewis and Clark expedition led by Sacajawea traveled along an old buffalo trail through this pass of the Gallatin Range, a spur of the Rockies. In the mid 1860’s, John Bozeman led settlers through the pass on what became known as the Bozeman trail. Three years of white settlers moving west through this pass came to an abrupt stop by the Sioux and Cheyenne Indians who wanted to stop the immigration of new settlers into the area. Almost twenty years later, the Northern Pacific Railway finished their route through Bozeman Pass in 1883 which paralleled the Bozeman Trail.

Two other routes were surveyed but Bozeman Pass was favored.

To continue west from Livingston, Montana, the Northern Pacific Railway needed to get over the Gallatin Range, a fifty-five hundred foot barrier. One of two crossings they needed to cross the Rocky Mountains, the other being Mullan Pass. The climb up Bozeman Pass was 996 feet to the tunnel portal that bored 3,610 through to the western side of the summit crossing. They were able to keep the grades under 2.2%. Later, the Northern Pacific created a continuous grade and climb that ran the 12.2 miles between Livingston to Muir, the eastern portal of Bozeman Tunnel. The western side of the pass was much more rugged with a six hundred foot drop in elevation in roughly six miles but then flattened out into the Gallatin Valley. Two other routes were surveyed but Bozeman Pass was favored. One would have come down the Missouri Valley via the pass at Sixteen-Mile Creek. Even though this route wouldn’t require a tunnel, it had two summits to crest and was 40 miles longer. The other one would have crossed the divide at the Bull Mountains and ran to Helena by way of the Gates of the Mountains.

A new shorter tunnel was constructed at the summit alongside the old one with a slightly lower summit crossing in 1945. On March 2, 1970, four railroads, (Great Northern Railway, Northern Pacific Railway, Spokane, Portland and Seattle Railway and the Chicago, Burlington and Quincy Railroad) were merged together to form the Burlington Northern Railroad. The Northern Pacific’s route across the Rockies was 2nd to James Hill’s Great Northern Route across northern Montana. Hill’s route only had to cross the Rocky Mountain Range once (Marias Pass) at a lower elevation and better grades, so the route was spun off to Montana Rail Link in 1987.

BNSF still maintains trackage rights over its former NP line, seen here as a Montana Rail Link helper set out of Livingston, help muscle this grain train up the eastern side of Bozeman Pass before first light.