Steel is an alloy of iron and a variety of other elements, including carbon. With the invention of the Bessemer process in the mid-19th century, steel became an inexpensive mass-produced material. Once the backbone of the United States, steel has been on a downward spiral since the late 1960’s. Most have closed their doors long ago and only a handful still survive. The United States led the World in steel production by 1900 but has since lost that title. In 1900, the US was producing 37% of the world’s steel but today only produces 14.5%. The steel industry is a large consumer of raw material which it needs to make finished steel. The raw materials include iron ore, coal (coke), and limestone. When steel demand or production goes down so does the demand for the raw materials needed for the steel. Many heavy industries are interconnected in some form or another. Steel mills also use to be a huge employer in the US but many technical breakthroughs and modernizations have cut the workforce once needed to produce steel. The steel mill work force in the US went down over 500,000 in 1970 down to just over 150,000 in 2000. 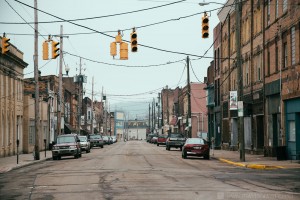 “The plant is massive, grime-streaked, squatting in the valley under five massive stacks, each one trailing a black ribbon across the winter sky. Fires can be seen flickering through the windows and long flames weave and dance from the tops of guyed metal flues. Steam rises in clouds from vents and chimneys and the sound of it all — the hissing, the clanging, the rumbling, the shrieking — comes faintly, muted by the falling snow.” ~ The Deer Hunter