Travel through the vast desolate plains of North Dakota, amongst sleepy farm communities of familiar landscapes, the vast blue open sky in the great wide open; when the scenery that surrounds you is forever altered by the fascinating and remarkable transformation of a bustling industrial community. Once grain elevators towered over these prairies of golden fields, but now hotels and oil rigs stand tall in the skyline. Welcome to Williston, North Dakota, the new modern day “gold rush” town of the oil industry with heavy truck traffic, miles and miles of temporary housing, new hotels, and the well-established “man camps”. This is the location of the Bakken Shale, an oil-rich rock formation that stretches across parts of North Dakota, Montana and Canada. 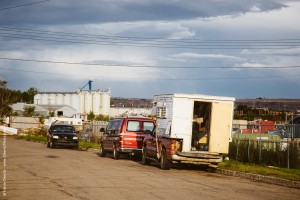 Locals and newcomers alike often remark that the attraction of this oil boom is like “The Klondike” and are wracked with their own cultural conflict of this economic force. An area of the Yukon Territory in Canada, the Klondike, was the backdrop for the most spectacular resource boom-and-bust series North America has ever witnessed. At the discovery of gold in 1896, along a tributary of the Klondike River, an estimated 100,000 Americans and Canadians sought to discover their fortune by scaling over the mountains of Alaska and British Columbia and down the Yukon River. It is estimated about 30,000 reached Dawson City, which ballooned in two years from a town of just 16,000. Not many captured a significant profit from the grueling journey before the gold gave way and the rush ended in 1899. Many in and around Williston, North Dakota, are cautionary of the fleeting tale of the Klondike gold rush and their own boomtown success with the black oil “gold rush”.